Time is of the essence in metaphysical thriller 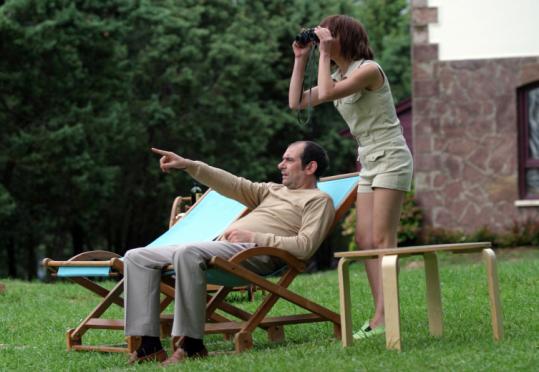 It could happen to anyone. One minute you're in your backyard minding your business, the next you're running from a homicidal maniac who happens to be you. Welcome to "Timecrimes," Nacho Vigalondo's inverted horror-thriller joke, where you're never entirely sure whether what's happening to poor, snoopy Hector makes an ounce of even pseudo-scientific sense. But the director operates his metaphysical contraption with enough wit to jolt away your skepticism.

One Saturday afternoon, middle-aged, middle-class Hector (Karra Elejalde) is peering beyond his property in a Spanish suburb and sees a woman (Barbara Goenaga) in the woods. Soon the woman is topless and, by the time Hector has trudged through the trees toward her, she is dead. Her presumable killer (his head and face wrapped in gauze) has now decided to chase Hector.

This bogeyman scenario sounds familiar enough, but Vigalondo's aim is to flip over horror cliches. Hector wanders into a laboratory whose resident scientist, played by the filmmaker, instructs him to hide in a giant vat. Never mind that white liquid inside. Never mind that this place looks like a set from "Doctor Who." When Hector hops in, it's night. To his bewilderment, when he crawls out, day has broken.

So has the movie's genre. "Timecrimes," which opens today at the Brattle, runs on a continuous loop whose logic expands with additional viewing: Could the milky fluid in that vat pass for amniotic? Jumping over a fence doubles as the crossing of a logical line. And the repeated playing of "Picture This," Blondie's consideration of voyeurism and its discontents, mirrors Hector's attempt to re-grip reality and reassemble himself. ("All I want is 20/20 vision/ a total portrait with no omissions").

Really, though, narrative ignorance here is a kind of bliss. The very notion of Hector and his human sequels was enough to make me laugh. So was the way Elejalde's putty face seems to transform from Rowan Atkinson to Sam Raimi's "Darkman" to Boris Karloff to the Toxic Avenger with a simple application of gauze or gore.

Vigalondo is only partially capable of building suspense (the film's latter stages contain one knot too many); his achievement owes more to his imagination than his pop craftsmanship. Like a Michel Gondry music video without the music, "Timecrimes" coasts on a pleasurable low-tech sci-fi ingenuity. Vigalondo's decision to cast himself as a mastermind who either knows everything or absolutely nothing is nifty. If the director can't figure out what's happening, how can we?

How, for that matter, will David Cronenberg? Yes, as I type, the director is finishing a "Timecrimes" remake. This should be exasperating, but it's easier to imagine that all along Vigalondo had in mind movies and their clones. In that sense, Cronenberg's remake of a movie about doubling seems fair. "Timecrimes" deserves a doppelganger.