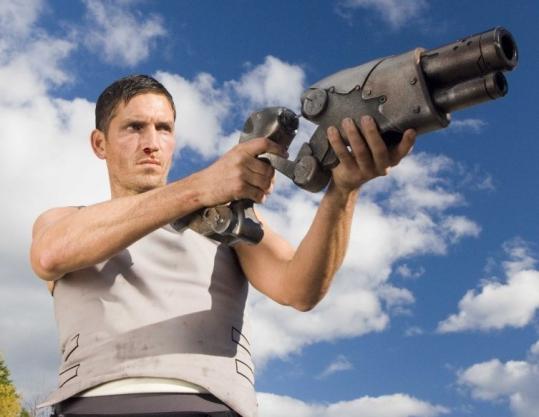 Handsome James Caviezel crash-lands from space to Vikings-era Norway in "Outlander" and proceeds to help a tribe of heavily bearded crypto-medievals rid their community of the "Aliens"-caliber creature the spaceman brought with him.

What's that? Handsome man? Medievals? Science fiction set in the distant past? I know, I know. But it's "Out-lander." "Highlander" is something else. (Basically.) Both are high-concept effects adventures, but Christopher Lambert didn't spend five "Highlander" movies in a wetsuit the way Caviezel does here. In many scenes, he looks like he's on his way to a spinning class on the Starship Enterprise. "Hi, I'm Captain James T. Kirk. I'll be your instructor this morning."

Caviezel, playing a man named Kainin, acts with that kind of push, too. He really is leading a workout - the grunting, the beads of sweat, the shouts of encouragement. He shows the Norsepeople (feisty Sophia Myles, chest-beating Jack Huston, John Hurt as king, and, all-too-briefly, Ron Perlman as a rival tribesman) how to obliterate this people-eating creature, called the Moorwen. (It's from outer space but has a name straight out of "Beowulf.") Nothing seems to work. And the movie builds a fair degree of intrigue over how this massive, impressively designed special effect can be stopped. But as handsome as "Outlander" is to look at, it's never exciting or interesting enough to justify waiting 100 minutes for an answer.

Anyway, the real question is will the Norsefolk learn to worship Kainin? Caviezel, who hasn't been in a whole lot since "The Passion of the Christ," gets to play another savior.

Director Howard McCain does nothing wrong, per se. The showdowns and stunt work are watchable. But proficiency is beside the point in a venture like this. You need a spark of madness or glee. Something unforeseen or shameless but a little embarrassing - like Sean Connery in two "Highlanders." Once or twice the camera splatters with blood, but where's the joy?

Written by: McCain and Dirk Blackman