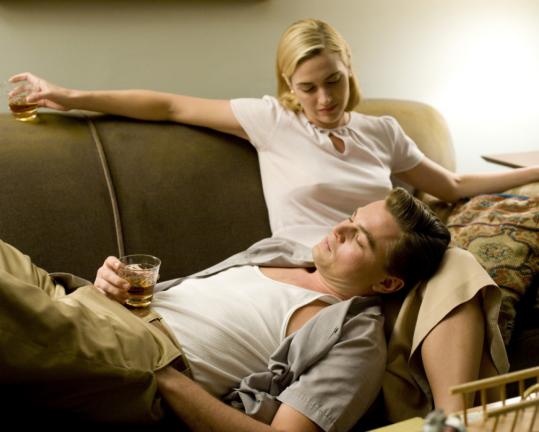 Maybe it's a cheap shot to call "Revolutionary Road" "American Beauty" without the laughs, but it gets to the heart of the problem. The British director of "Beauty," Sam Mendes, has returned to probe the existential angst of American suburbia, but this time he has a great novel at his back, and he's weighed down with his responsibility to literature. This film isn't told, it's Told. There will be a quiz.

After decades of John Cheever, J.D. Salinger, and "Mad Men," the film's story line is familiar to the point of cliche. There's a vast, gnawing unhappiness behind the picture windows of the middle class, or didn't you know? Published in 1961, Richard Yates's debut novel came at the end of the genre's initial post-WWII cycle, and the book has lasted only through the awesome surgical relentlessness of its prose. The marriage of Frank and April Wheeler is described in passages that peel apart layers of truths, half-truths, lies, and self-deceit; the book is intensely depressing yet incandescent. Rarely has a writer shot fish in a barrel so brilliantly.

Less than half of this makes it to the screen, and most of it is brought there by Kate Winslet. She plays April with so many buried reserves of anger, sorrow, and self-loathing that it hurts to look at her, yet the surface is chic and artful. (She makes the desperate housewives on TV look like mannequins.) Her neighbors in late-1950s Connecticut, a lumpy suburban couple played by David Harbour and Kathryn Hahn, have placed her on a pedestal. Her husband, Frank (Leonardo DiCaprio), is torn between climbing up there with her and pulling it down.

The drama of "Revolutionary Road" isn't much, which is to say it's the stuff of "real life": the Wheelers fight like alley cats, decide to relocate to Europe, get bogged down by inertia and Frank's confused ambitions. Some in the audience may object to paying for what they can get at home for free. In the book, the couple's very ordinariness was a secret they withheld from each other and themselves, and that was the tragedy as Yates saw it: We're never the stars of our youthful dreams, and it hurts like hell to admit it. Where the novel had a cold (and elitist) empathy, though, the movie is merely cold.

Part of the problem is DiCaprio, who seems too callow for his role even at 34 (Winslet looks like she could lick him with one hand tied behind her back). Without Yates dissecting his inner motivations into their constituent molecules, Frank is a much thinner character. When he drifts into an affair with a secretary at his office (Zoe Kazan, herself less interesting than on the page), he seems merely caddish. Mendes can't locate the visual equivalents of the book's unsparing psychology, so he embalms it with pristine cinematography (by Roger Deakins), costumes (Albert Wolsky), and score (Thomas Newman). There's a splash of blood toward the end of "Revolutionary Road," and it was so perfectly beautiful I wanted to scream.

One of the characters that survives this funeral march is John Givings (Michael Shannon), a mentally disturbed man whose mother (Kathy Bates) brings him over to the Wheelers on his days off from the institution, to give him someone "interesting" to talk with. He functions (rather baldly) as the book's jester, saying all the cruel things the others can't bear to blurt out, but Shannon's performance is so angry and unpredictable, so weirdly mouthy, that "Revolutionary Road" jerks briefly to life in his scenes. Here at last is the scorn both Yates and Mendes work so hard to conceal; the movie, at least, might have been more honest to let more of it show.

But, again, it's Winslet - Mrs. Mendes, by the way - who shoulders the emotional burden in the film's final scenes. This actress is so good, so sure of herself, that she makes you ache for April's descent into bourgeois hell. The Wheelers have young children who, as in the book, are unimportant stick figures - both book and film have a terror of parenting that is left unexamined - but in April's frozen smile you can sense the selfishness that's both monstrous and noble. Winslet gives a fearless performance here. It's not her fault her husband has shrouded it in Taste.

Written by: Justin Haythe, based on a novel by Richard Yates