Short and sweet - at least, some of them 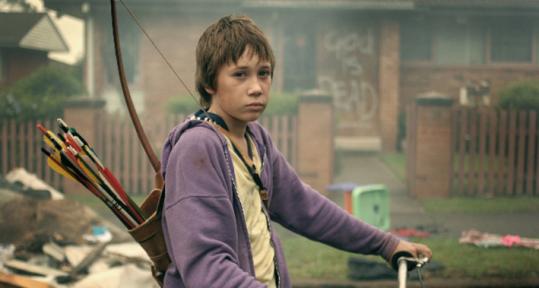 Every year at the Sundance Film Festival, the short-filmmaking programs fall through the cracks of a lot of people's schedules. Many shorts are tacked on to features as a sort of trailer - a coming attraction, perhaps, of future talent.

To highlight these overlooked films, the folks at the Sundance Institute, which organizes the festival, have sifted through this year's program shorts and collected nine for a sampler, playing at Coolidge Corner Theatre. It begins in earnestness and ends, more or less, in jest.

The hardest-working of the bunch is Osbert Parker's "Yours Truly," a film noir remix that ropes together projection, various animation styles, and live-action props. The result is a collage that features, among others, Humphrey Bogart and Barbara Stanwyck in their black-and-white glory, resituated from other movies into Parker's. Bogart is being chased; Stanwyck is scheming. The piece manages to whip its ghostly, energetic cleverness into kicky visual poetry, although it's fun even as a technical exercise.

The shorts' emotional highpoint is "My Olympic Summer," in which Daniel Robin reconsiders his parent's marriage and, consequently, his own failed one, after watching home movies of his folks. Talking over the footage, he wonders about his mother's happiness and reads from a letter she never sent Robin's father, who was an American military chaplain. The filmmaker finds mysterious footage from a trip his mother took to Holland without her husband. Who's holding the camera? And why does she seem so happy? The typical Sundance wallow ("Why am I blue?") has real existential wonder about the ebb and flow of marital love.

Mads Matthiesen's "Dennis," from Denmark, is remarkably weird. An adult bodybuilder disappoints his mother (and roommate) when he goes on a date with a woman. But it ends sadly and he comes home - the idea being nobody loves this tattooed giant like his momma. At least, that's what he seems to think.

Almost everything else in the program errs on the side of preciousness. In "W.," by a German outfit called the Vikings, a large man in a mime's costume complains to the camera that no one appreciates him, while we watch footage of him harassing people on the street. The punch line is cute. So, in its way, is Spencer Susser's "I Love Sarah Jane," which is set in a post-apocalyptic Australian suburb where some parentless neighborhood kids torture a zombie. You wait for several minutes for the title to explain itself, which, in its sweet, jokey finale, it does.

Finally, "Spider," by Nash Edgerton, uses tired, violent effects for the sickest joke of all. It offers tragedy and romance as gags, featuring an Australian couple on a drive. I gasped twice. But as well-delivered as its shocks are, this film is cleverness in the service of cruelty.

In English, Inuit, and Dutch, with subtitles