Survivors with 'A Secret' 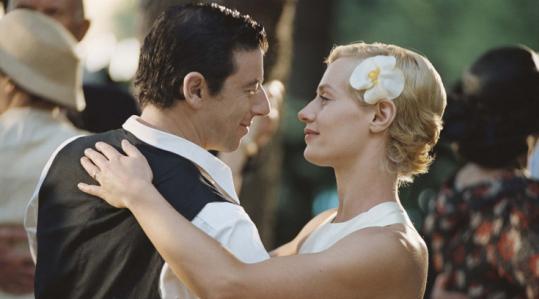 A pained, painful story of physical desire and survivors' guilt in WWII-era France is over-directed into melodramatic hash in "A Secret." Based on Philippe Grimbert's "Memory," a prize-winning 2004 novel that fictionalizes his own family history, Claude Miller's film (a co-presentation of the MFA and the Boston Jewish Film Festival) is handsome and troubled and provocatively obsessed with the past's grip on the present. It's also a structural mess that turns contrived just when it should be hitting home.

The film's narrator is Francois Grimbert, whom we see at various stages of his life: as a shy, sickly 7-year-old (Valentin Vigourt), a brooding adolescent (Quentin Dubuis), and a grown man (the ubiquitous Mathieu Amalric). The secret he keeps circling around in all these periods is what his Jewish mother, Tania (Cecile De France), and father, Maxime (Patrick Bruel), did during the Nazi occupation, and why their lusty carnal bond is so freighted with tragedy.

Miller establishes the parents as almost godlike physical specimens: She's a dress model and champion swimmer and he's a strapping gymnast. Both look upon their son as a pale curiosity. Their emotional distance is partially explained by a back-story slowly filled in by a family friend (Julie Depardieu): Maxime had a wife and young son who died during the war. Are he and Tania survivors who picked up the pieces after the death camps were shut down? Or did their love prefigure disaster?

"A Secret" shuttles between time periods with a delicacy that proves confusing; halfway through, it settles into a wartime romantic triangle dramatized with portentous looks and close-ups of hands. At best, this translates a writer's careful investigation of ethnic and family identity into hackneyed movie terms. At worst, it comes close to trivializing the Holocaust.

Buried at the center of "A Secret" are a character and a performance that give the movie just enough weight to hold it down: Maxime's first wife, Hannah, played by the changeling French actress Ludivine Sagnier as a young, openhearted "Yiddische mama" ruined by domestic events. Where the other players posture, Sagnier digs deep, and she doesn't destroy the awful mystery of her climactic decision by trying to make sense of it. Some acts can't be explained except, perhaps, as a misguided and monstrous form of punishment, a wormy truth this movie spends much of its running time dancing prettily around.

Written by: Miller, based on a book by Philippe Grimbert

At: Museum of Fine Arts, today and various dates through Jan. 3