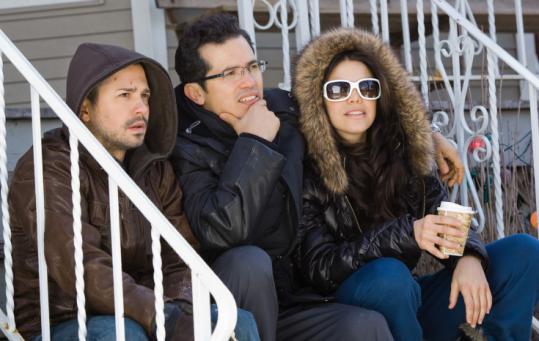 "Nothing Like the Holidays" offers proof that canned ham can still taste pretty good. A Latino entry in the weathered home-for-the-holidays genre, the movie leaves no cliché unturned, but the enthusiasm of the players and the genuine fellow feeling that courses through the story fan a few new flames from the smoldering Yule log. Next to a garish plastic Santa like "Four Christmases," this is a handmade ornament - not very elegant but you're glad to hang it on the tree anyway.

Not every Hispanic and Latino actor in Hollywood has been given a part here - it only seems that way. Actually, there's a ringer at the head of the table: the British-born Spanish/Italian actor Alfred Molina as Edy Rodriguez, Chicago bodega owner and paterfamilias to a large, fractious Puerto Rican clan. Arriving home for Christmas are his three children: Iraq war vet Jesse (Freddy Rodriguez), struggling LA actress Roxanna(Vanessa Ferlito), and Wall Street honcho Mauricio (John Leguizamo), the latter toting his yuppie bride, Sarah (Debra Messing).

At first, "Nothing Like the Holidays" looks like it's going to set up the Anglo for potshots: Sarah is a tightly coiffed ice cube who barely speaks Spanish and doesn't want kids. Yet director Alfredo de Villa and his writing team (Alison Swan, Rick Najera, Robert Teitel) throw gentle curveballs throughout.

When mom Anna (Elizabeth Pena) announces her intention to divorce the wayward Edy at the dinner table, the family freaks out in unexpected ways. Powerbroker Mauricio falls apart completely while his wife turns out to know more of the family secrets than she's letting on. (You'll guess the big one before anyone in the movie does.)

Meanwhile, Jesse has to come to terms with his Iraq traumas while trying to woo an ex-flame (Melonie Diaz) and Roxanna needs to decide whether the Hollywood C-list means more than local sweetheart Ozzie (Jay Hernandez), himself dealing with a street-revenge subplot. The ribbons are laid out with care and the cast acts like they've never tied them into bows before.

The tartest performances come from the ever-reliable Pena - she invests every bit of business with sublimated fury - and Luis Guzman as a loudmouthed family friend, the jester who gets to say what the others can't. At its most original, "Nothing Like the Holidays" implies there's no greater force for conservatism in a Latino family than the children, desperate to hold together the illusion of clan while the parents deal with unpleasant facts.

The movie's not really interested in originality, though. Instead, it wants to wrap the old seasonal homilies in the warm specifics of time and place and ethnicity. At that, it succeeds. Both despite its familiarity and because of it, "Nothing Like the Holidays" brings it home for Christmas.

Ty Burr can be reached at tburr@globe.com. For more on movies, go to boston.com/ movienation.

Rated: PG-13 (thematic elements including some sexual dialogue, and brief

In English and Spanish,