Actors happily give their all for locally filmed flick 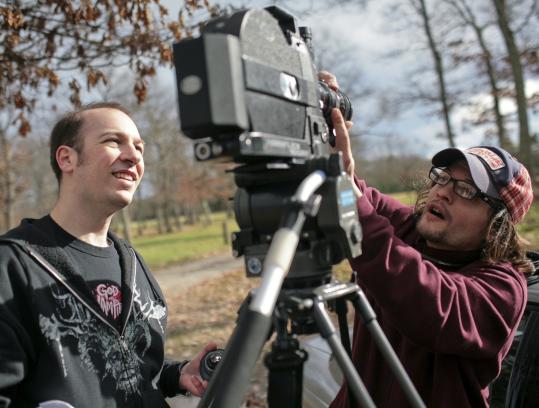 Don't let those screams worry you, John Gage told his neighbors in Medford. Indeed, nobody was harmed, though the same can't be said for the kitchen floor. Gage still isn't sure how to clean up after the dismembered arm [made of silicone] that got stuck to the linoleum.

Gage's first-floor apartment in a two-family house on Revere Place served as a set in the movie "Drive-In Horrorshow," a collection of five scary shorts in the tradition of "Tales From the Crypt."

The movie is a first for director Michael Neel and producer Greg Ansin. The Boston filmmakers have teamed up in the past on documentaries, most recently "Growing Old," about three Cambridge seniors. They see the horror genre as a way to make a potentially breakout film on a shoestring budget of $100,000. The movie could be ready as soon as spring. While it may debut on the midnight bill of a local movie house, distribution will probably be through DVD, direct downloads, and/or cable.

Neel got his start in drama performing for Watertown Children's Theatre. Its director, Dinah Lane, takes pride in her alumnus, but would just as soon not take credit for the macabre turn in his career.

"I knew he had a penchant for Stephen King, but I wouldn't have ever suspected this," said Lane, who agreed to play a nongrisly role in the film.

Indeed, Neel, who now lives in Allston, does not appear the type to consort with zombies, cannibals, and serial killers. An oasis of calm amid the screams and peeling bodies, he is generous with praise, diplomatic with criticism, and meticulous with his organization.

The scene at Gage's apartment was more like that of a laid-back party than a monster mash during filming last month. Gage, who serves as soundman on the movie, talked up his band, Bill, which performs on the soundtrack. It is named for Gage's brother, the lead singer, who has Down syndrome.

Nadia Delemeny joked about her double life as a Wellesley mother and a horror actress. She plays the ex-wife of a doctor who contracts a flesh-eating disease in a story aptly titled "Fall Apart."

"I go home, and my children ask, what happened today? I tell them, 'Well, my husband's fingers fell off.' And they love it," she said.

Delemeny, whose father is American and mother French, went to the Royal Academy of Dramatic Art in London, before dropping out for theater and television roles in Britain. She also appeared as a damsel in distress in "Grimm," a 1995 horror film that she is loath to discuss much beyond that it helped her launch a sideline career dubbing screams.

Which is why she could critique with some authority her costar, Larry Jay Tish, as he practiced screaming in Gage's bathroom. Tish, who plays the doctor, was rehearsing a scene where his fingernail slides off. Tish's other gigs include the Jewish half of "The Black Jew Dialogues" and the hyperactive Professor Fritz on Channel 5's Sunday morning show "Totally Patriots."

As it happens the doctor comes down with the disease just as he's on the verge of reconciling with his former wife. At least they get to enjoy one night together.

"This is the best your relationship is ever going to be," Neel tells the actors as they embrace [somewhat uneasily] in bed. "You don't know that now. But this is one of those great moments."

The 30-second bedroom scene takes about five minutes to shoot. It's completely G-rated. After all, it's not sex, but gore that horror fans want.

And they get gore in spades in the movie's final scene, shot in Derry, N.H., where makeup artist Rob Fitz spent two hours preparing the doctor for his demise. Fitz - who recently made his own horror film, "God of the Vampires" - converted the barn behind his house into a special effects studio.

Usually, the Salem native is called upon to make people look good, not ghoulish. He does the extras when Hollywood projects come to town, such as Mel Gibson's "Edge of Darkness."

Neel has high hopes for the climactic scene when the doctor's bandages are unwrapped. "This might be the one where people walk out of the theater, which I guess if they do is kind of a compliment."

Not that he'll present gore for the sake of gore. "For 'Fall Apart,' I wanted the grossness to be an essential part of the story," he said. "If you're doing a flesh-eating virus, you have to show what this thing is and what it does."

Neel sees part of the attraction of horror films as being curiosity about death and dying.

"At a certain point you kind of want to push yourself and see how much you can take," he said. "It is gross and disgusting and over the top, but at the end of the day, you're still someone sitting the theater or at home on the couch and nothing really has happened."

Neel anticipated problems casting children, who appear in several stories of the horror anthology. He arranged the scenes so they would be filmed separately from the gore. That turned out to be unnecessary.

"The kids and most of the parents were kind of disappointed that there wasn't going to be a lot of violence and monsters and bloodshed when they were on the set," Neel said. "I think everybody wanted to be torn to pieces."