'I wanted evidence of these lives that were cut short' 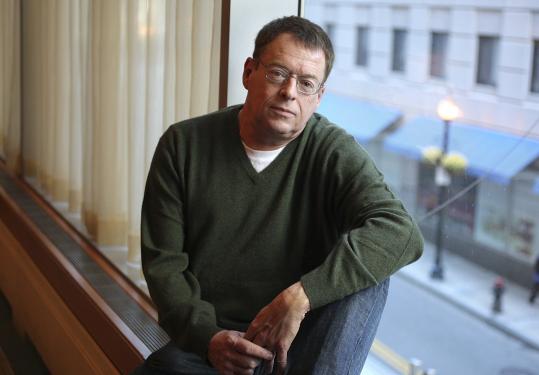 Cleve Jones, who was Harvey Milk's protégé and friend in the '70s, was an adviser on the new movie ''Milk.'' (SUZANNE KREITER/GLOBE STAFF)
By Erin Trahan Globe Correspondent / November 23, 2008
Text size – +

With Wednesday's release of "Milk," Cleve Jones has the rare opportunity to exist simultaneously as Jones the political upstart who comes of age in San Francisco during gay liberation, and Jones 30 years later, a seasoned gay rights activist and adviser for a feature film he's been waiting 18 years to see.

Harvey Milk was Jones's mentor and friend. "Milk" combines archival footage with the story of Milk's recruitment of Jones and other supporters, his unyielding pursuit of a seat on the San Francisco Board of Supervisors, his rallying against a statewide referendum to fire gay schoolteachers, and his tragic assassination.

Hirsch seized the opportunity to consult with Jones before filming and on set every day. "It was like having the answer book," said Hirsch in an interview by phone. "I would ask him things like, 'How did you feel about this situation?' 'What was your relationship with this person?' "

The film's uncanny timing in light of this month's approval of Proposition 8, which bans gay marriage in California, and the subsequent outcry, are not lost on Jones. In response, he and "Milk" screenwriter Dustin Lance Black coauthored a manifesto and announced a campaign they call Seven Weeks to Equality, to begin on Nov. 27, the 30th anniversary of Milk's assassination.

The Globe spoke with Jones the day after he was present for a screening of "Milk" with college students in the Boston area.

Q. The first time we meet the Cleve Jones character he brushes off Milk's attempt to recruit him for his campaign. How old are you in that scene?

Q. The next time your character appears, he is brokenhearted but his demeanor suggests something more serious has occurred. What's the audience to presume about what changed in your life at that time?

A. It wasn't until I got back from Europe and experienced a protest march in Barcelona where the Guardia Civil opened fire on the crowd with rubber bullets - there was bloodshed, and real rioting in the streets - that was when I more clearly saw the importance of electing openly gay and lesbian people.

Q. Is that when you perceived Milk as your mentor, or yourself as his protégé?

A. I didn't really take Harvey seriously when I first met him. He was this character, you know, he ran for office four times! But he had this incredible knack with young people, boys and girls, gay and straight alike. It was as if he could have the briefest of conversations with you and unearth strengths you didn't even know you had. I was a film major and there was this little showing of films that Harvey and others put together that later morphed into the San Francisco Gay and Lesbian Film Festival. I showed him some of my work and he very gently said, "Cleve, you have no talent." [Laughs] He said if I'd change to political science I could work for him in his office for college credit.

Q. The film was shot on location in San Francisco's Castro neighborhood, including the site of Castro Camera, Milk's business and makeshift election headquarters. What was it like to be transported back in your own life 30 years?

A. There was a lot of crying, especially at the beginning because the neighborhood was so devastated by the AIDS pandemic. By 1985, 1,000 of the residents of the Castro had already died. I started the AIDS Memorial Quilt out of a fear that my friends and I, and the world we created for ourselves, would vanish without a trace. I wanted evidence of these lives that were cut short so brutally, and this film has done that as well.

Q. How would you describe the mood after the screening with local college students?

A. I have been very concerned about this generation. I've heard them described as apathetic but I never thought that was true. I believe they are overwhelmed and confused and uncertain. So I asked, "How many of you have been out protesting?" Three quarters of them raised their hands. You know, when I was young, I was very impatient. I wanted everything, now! I think that's part of youth, but I also want them to understand there are things worth waiting for, perhaps not patiently, but with an incessant demand. It took us a long while to bring this story to the big screen. It was worth the effort and time. It will take a long time for us to achieve full equality, but it will be worth that effort and time.