Undying love: Desire and fantasy fly from the page to the screen with delight in 'Twilight' 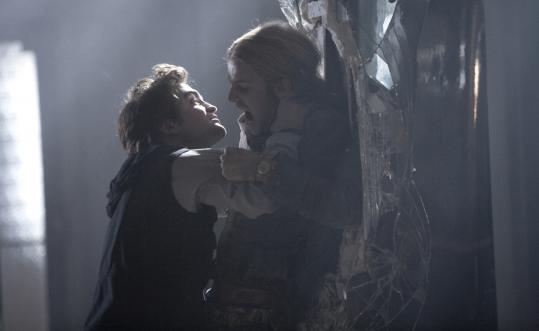 Remember the first high school crush who crushed on you back? Remember trembling right at the precipice of desire, of being flattened by emotions for which you had no words? Remember how it felt to know someone else's secret self - the frightening power it gave you and the danger of potential self-obliteration? Remember when love meant more than death?

No? In her canny, inelegant fashion, writer Stephenie Meyer remembered, packaging those fierce longings in "Twilight" and its three sequels. The books tell of the romance between Bella, a quiet, self-conscious high school junior, and Edward, an eternally 17-year-old, eternally misunderstood vampire. Meyer's not the greatest writer, but she located the missing link between gothic fiction and Goth, and it hit 14-year-old girls of all ages (and genders) like a hormone bomb.

Now comes "Twilight" the inevitable movie version - accompanied by a mass adolescent shriek so high-pitched only dogs and shopping mall security guards can hear it - and, lo, it's a darn good hunk of pop moviemaking. Actually, the movie's a better movie than the book was a book, in part because Meyer struggled to put her characters' galloping emotions into print whereas director Catherine Hardwicke just visualizes them in all their inarticulate purpleness.

Anyway, she knows her turf. In "Thirteen," "Lords of Dogtown," and even "The Nativity Story" (a.k.a. "I Was a Teenage Virgin Mary"), Hardwicke has made young, conflicted passion her topic A, and she seems congenitally unable to condescend to her subjects. The volcanic desires in "Twilight" are conveyed with the proper mix of intimacy, over-the-top tempest, and even self-mocking humor, but, more than that, the kids feel right in their hopes and cynicism. Forks High School has been made reassuringly real, the better for fantasy to take wing.

Kristen Stewart plays Bella like a well-balanced Morticia in training. Pale-skinned, her lips thin with impatience at the world's many small failures, she arrives in the small-town Pacific Northwest ready to wrap its fog around her shoulders. Her new friends are outgoing, puppyish, but Bella prefers to "suffer in silence." Then she meets Edward Cullen (Robert Pattinson), who with his four undead siblings enters the school cafeteria in a slo-mo shot as funny as it is ridiculous as it is thrilling.

No one else is aware of what the Cullens really are - they're just Kabuki-faced kids who never eat lunch and stay home from school on sunny days, what's the big dealio? - but Bella knows. If she didn't, she'd have to catch on after Edward saves her from an out-of-control van in the school parking lot. The scene's shot as their first real date, the two silent and awestruck amid a tangle of metal.

If you're coming into this cold, please understand that the Cullens are good vampires who avoid human blood and concentrate instead on thinning the deer population of greater Washington State. Edward calls his family "vegetarians" and likens their food choices to tofu: "It keeps you strong but you're never really satisfied," he broods, hinting at the steak tartare he's craving. Somewhere out there, sadly, is a trio of far less picky bloodsuckers (Edi Gathegi, Rachel Lefevre, and Cam Gigandet); to goose suspense, the film shows them working their way toward our heroes much earlier than the book does.

In most other respects, "Twilight" the movie is unerringly faithful to the source without being hamstrung by it. This isn't a like Ron Howard's dirt-dull "The Da Vinci Code," but rather a cinematic amplification, and while Hardwicke has a lot to learn as a director of action sequences, she walks a wickedly smart line between indulging the corn and keeping her distance. This allows young women like those sitting next to me at a screening to silently mouth the dialogue along with the movie while giving us non-believers enough wiggle room to breathe.

While some of the players have the mannequin handsomeness of "One Tree Hill" extras - Peter Facinelli as Edward's adoptive father Carlisle, Ashley Greene as psychic sister Alice, Billy Burke as Bella's mordant sheriff dad - the heroine's classmates are a nicely unkempt bunch, especially Anna Kendrick as OMG best-pal Jessica. (Some of us have been watching this actress steal scenes since 2003's "Camp.") Stewart leans on her sullen monotone rather too much, but in fineness of features and hesitancy of emotions - Bella swoons, but slowly - she's a good match for her leading man.

And Pattinson is good - close to a revelation, in fact. It's the silliest of roles, really, since Edward has to be noble, messed-up, dangerous, and a sweetie-pie all at once, but the young British-trained actor makes it work by letting us see the absurdity of this vampire boy's life. He knows when to step on the gas and when to hit the brakes - both he and Stewart underplay their lines to keep them from tipping into comedy - and he conveys above all the pain of being, literally, forever young. At times, Edward shivers like James Dean without his jacket. He's a rebel without a pulse.

"Twilight" is at its best when dealing with intimacy rather than plot; the love scenes are filmed in close-ups that are purposefully too close, and when Edward and Bella finally kiss, the moment is as cold as it should be and as hot as it needs to be. This is the opposite of the book, where the love scenes meandered endlessly (caveat: I'm not a 14-year-old girl) and we all perked up when the bad vampires arrived toward the end. Hardwicke is as entranced by desire as her characters are, and she caves into the necessity of story reluctantly and unconvincingly. The baseball game of the undead isn't as weirdly funny as in Meyer, and the showdown with Gigandet's unstoppable villain feels like the filmmaker is throwing in the towel.

Besides, the important stuff has happened earlier, in those lovely, painful scenes between Bella and Edward. Hardwicke understands the dirty little secret of "Twilight," which is that it's all about sex without being about sex at all. In this story, a teenage girl falls for a gorgeous, tormented boy who could overpower and ravage her - could annihilate her - anytime he chooses. Instead, he holds back for her own protection until being annihilated is all she can think about.

As a metaphorical empowerment fantasy, that's a pip, and it's in keeping with both the book's mass spell and a filmmaker's vision of headstrong young women making their own choices, come hell or, in this case, Hell. Mom and Dad may think "Twilight" is just a ripsnorting yarn, but, as Howlin' Wolf once noted, the little girls understand.

Written by: Melissa Rosenberg, based on the novel by Stephenie Meyer