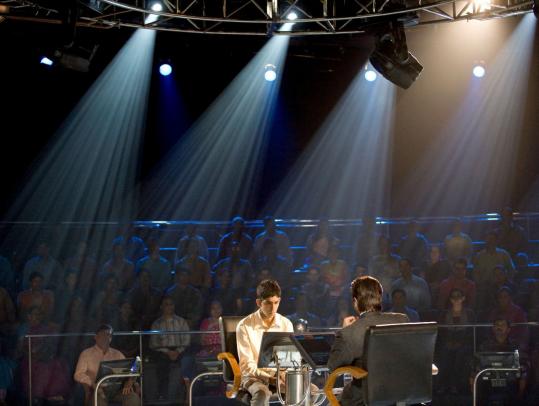 A contestant (Dev Patel, center, with Anil Kapoor) on India's version of ''Who Wants to Be a Millionaire'' revisits his past while exploring the game's questions. (Ishika mohan)
By Ty Burr Globe Staff / November 21, 2008
Text size – +

I'll keep this simple: Cancel whatever you're doing tonight and go see "Slumdog Millionaire" instead. Yes, you, the girl obsessed with "Twilight" and the guy still hung up on "The Dark Knight." Take the grandparents, too, and the teenagers. Everyone can play.

You've never heard of the actors. A third of the film is in Hindi. Much of it takes place in the most fetid, poverty-ridden corners of the Indian subcontinent, and most of it isn't nice. Yet this sprawling, madly romantic fairy-tale epic is the kind of deep-dish audience-rouser we've long given up hoping for from Hollywood. "Slumdog" is a soaring return to form for director Danny Boyle ("Trainspotting"), but mostly it's just a miracle of mainstream pop moviemaking - the sort of thing modern filmmakers aren't supposed to make anymore. Except they just did.

Unfolding with the scope and brisk energy of a Dickens novel transplanted to Asia, "Slumdog Millionaire" is the tale of Jamal Malik (Dev Patel), a lanky, sad-faced Mumbai slum kid who, when we first meet him, is poised to win 20 million rupees on India's version of "Who Wants to Be a Millionaire" He has already aced the first rounds; tonight, the entire country will be tuning in to hear his final answer. The show's host, a blow-dried slickster played by Bollywood superstar Anil Kapoor, is not happy. So much so, in fact, that he has arranged for the local cops to give the kid a working-over.

Is Jamal a genius? Is he a cheat? How would a young man with no education and a life on the streets know whose picture is on a US $100 bill? That's what a police lieutenant (Irrfan Khan, the father in "The Namesake") hopes to beat out of him. When torture doesn't work, he sits the boy down in front of a videotape of his appearances on the show and demands to know, question by question, how Jamal did it. And thus an entire life unfurls before us, as does the history of modern India itself.

Boyle, working from Simon Beaufoy's adaptation of a novel by Vikas Swarup, gives us Jamal's unsentimental education in head-spinning, vertiginous flashbacks that become the main story line. Each answer on the TV show becomes a key that unlocks another chapter of the boy's past, a pat narrative device kept from cliche by the deft, vital filmmaking.

The first sequence, prompted by a question involving a famous Indian movie star - the sort of factoid any Mumbai kid would know - shows the hero's early years as both horrifying and exuberant. Jamal (played as a child by Ayush Mahesh Khedekar) and his brother Salim (Azharuddin Mohammed Ismail) take their desperate existence as merely the soup in which they swim; Boyle and cinematographer Anthony Dod Mantle visualize that soup with an astonishing pullback that reveals the vastness of Mumbai's tin-roof chaos.

The siblings' innocence, such as it is, ends when their mother (Sanchita Choudary) is killed in the anti-Muslim riots of 1992-93 and they take to the streets, picking up an urchin girl named Latika (Rubina Ali) in the process. The three small musketeers are taken in by a smiling villain (Ankur Vikal) who runs a school for child beggars; what this Fagin does to create an extra-special line of underage street singers marks the grueling nadir of "Slumdog Millionaire," yet the movie, knowing such things happen, doesn't let us look away.

The trio grow into adolescence and young adulthood, by which point the brothers have chosen their respective paths. The adult Salim (Madhur Mittal) has gone for quick cash and gangster glory; Latika (Freida Pinto) is the kept plaything of a mobster boss (Mahesh Manjrekar). Jamal has found work as a gofer at one of the new Mumbai's energetic, youthful call centers. He serves tea, absorbs everything around him, and, when needed, dons the headset to deal with cranky old ladies in Scotland.

Good brother, bad brother, childhood sweetheart torn between the underworld and true love: We've all been here before. Warner Brothers and MGM used to dine out on this stuff in the 1930s, with actors like Jimmy Cagney and Pat O'Brien and Ann Sheridan in the roles. Boyle cherishes the tale's popcorn durability, though - it's an old story because it works - and his team retrofits it, polishes it up, and sets it careening.

Mantle's images and Chris Dickens' editing are infused with the go-go colors and rhythms of the subcontinent; the co-direction by Loveleen Tandan adds to the sense of teeming sensory overload; the music keens with beauty and corn. (Even the subtitles feel fresh, popping up like speech balloons all over the screen.) The characters are archetypes draped with specifics of time and place and, in Jamal's case, of character. As Patel plays him, he seems too studious - too inward-directed - to be the hero of such a big movie, yet that's why we come to love him. In the rushing slipstream of "Slumdog Millionaire," he's our anchor.

This sort of headlong melodrama has long since dropped out of fashion in our irony-drenched age, and some audiences, I'm sure, will turn up their noses. There have been grumblings that the film's just too pretty, and that a movie about India directed by an Englishman can't be taken seriously. Allow me to float the idea that it's possible to talk yourself out of intense moviegoing pleasure.

And "Slumdog Millionaire" is a pleasure, as Jamal negotiates every obstacle before him (including, in one nerve-wracking turn of events, a psychological showdown with Kapoor's preening host), and teeters between intelligence, luck, and a destiny that he has in large part made for himself. In his story, the movie implies, is that of an entire modern nation. After the dust has settled, the Bollywood dance scene that explodes under the closing credits feels both incongruous and earned: Young India kicking up its heels.

You may even feel like dancing in the aisles yourself. Sure, the real world doesn't always work this way. Have you forgotten that this is one of the reasons why we go to movies in the first place?

Written by: Simon Beaufoy, based on a novel by Vikas Swarup

At: Coolidge Corner and Kendall Square

In English and Hindi, with subtitles