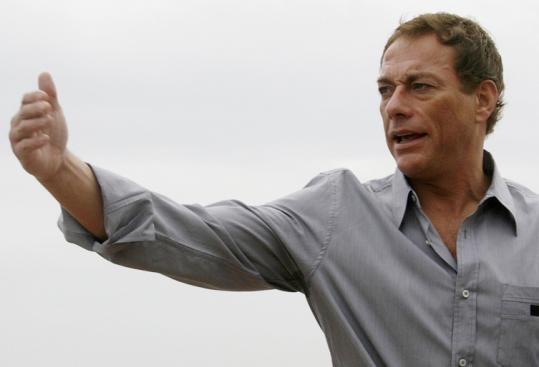 Street fighter. Universal soldier. Martial arts master. Jean-Claude Van Damme has played them all - over and over again, in fact - in dozens of movies during his action-packed career.

In his latest role, as Jean-Claude Van Damme in "JCVD," Van Damme portrays a character much closer to his fists: a version of himself. This fictional Van Damme is a somber and introspective (and deflated) star who has taken several punches in his professional and personal life.

"What if we see me not acting like a hero kicking everyone in the head?" said the real Van Damme during a phone interview from Bangkok, where he's editing his next movie. "What if I am against the world and open up my world and tell the audience that I loved them . . ."

Van Damme said he had fun playing a washed-out version of himself. Both Van Dammes are celebrated for their kicking, running, and punching skills on the big screen and in straight-to-video releases.

So how close is the character to the real actor?

"Kind of very close," he said. "If I am going to be against the world, why not tell what I say on the inside."

The movie opens with the Van Damme wrapping up a scene for an action movie. As he settles back into his native Belgium, where fans stop him and ask him to pose for photos, he walks into the post office - and a botched robbery.

Right away, police finger this Van Damme as the bad guy because the real thugs force him to negotiate for a ransom on their behalf. The cops and press believe that he's desperate for cash for his child's custody case.

"When you have a gun [to] your head, everything changes. We kept the move very much like me," said Van Damme, 48, who admits he doesn't know what he would do in such a situation.

Toward the end of the standoff, Van Damme breaks down into a dramatic soliloquy, speaking directly into the camera, and viewers see the character (or is it the actor?) confess his past drug use, vent about the price of fame, and discuss his love of karate and his ex-wives.

"People want to hear more [about someone's] problems than someone who is more successful," he said, noting today's confess-all culture. "A lot of people who are known are afraid to talk."

The film's director is Mabrouk El Mechri, who is also a fan of the action star's work. Van Damme said he gave El Mechri suggestions on what he might want to say to his fans to make the dialogue ring true.

"He came to me as a fan and a very intelligent fan who knew everything about my movies. He grew up with my movies. He saw my ups and downs. He wanted to show people something else about me," said Van Damme. "The big 'Muscles from Brussels' going back to his Belgian country. With some of my problems from yesterday, it became a 'Dog Day Afternoon.' "

What is next for the real Van Damme?

He's editing a movie called "Full Love," which he wrote, directed, and stars in. The movie is scheduled for a 2009 release.

"It's a film about friendship, love, betrayal, and in the middle of that, a surprise," said Van Damme, declining to elaborate on the plot. "I always wanted to direct."