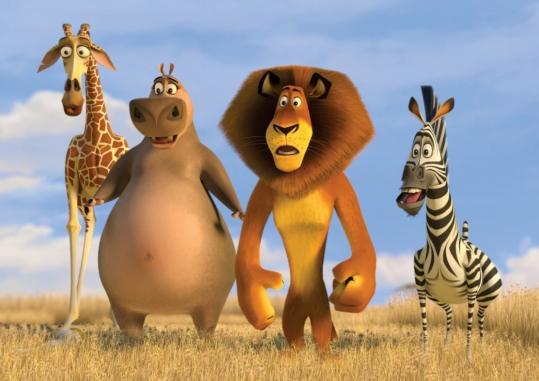 We all like to "move it, move it." Maybe that's why "Madagascar: Escape 2 Africa" is such a disappointment.

Given the popularity of the original's signature song - a hypnotic, irresistible Sacha Baron Cohen cover of Reel 2 Real's 1990s hit, "I Like to Move It" - a successful sequel should have been as easy as re-cueing the track, cranking out a few inspired lines, and filling in the pretty colors.

Those DreamWorks animators do have a way with pretty colors.

Unfortunately, just about everything else in "Escape 2 Africa" fails to drum up much excitement, and that goes double for the cartoon-hippo seduction scenes. If you own a TV, you will have heard the best laughs excerpted in unrelenting commercials leading up to the movie's release. The rest is pleasant, sometimes even amusing, but it's no more must-see than nap time at the zoo.

The sequel begins as a prequel. In Africa, a cuddly lion cub wanders outside the safe confines of his home reserve, falls in and out of the hands of hunters, floats across the sea in a crate, and winds up performing for audiences in Manhattan's Central Park Zoo, where he is named Alex and voiced by Ben Stiller. Suddenly we're back to where 2005's "Madagascar" began, with the popular dancing lion befriended by Marty the wisecrack-a-lackin' zebra (Chris Rock), Melman the neurotic giraffe (David Schwimmer), and Gloria the sassy hippopotamus (Jada Pinkett Smith).

In a dizzying setup sequence that is sure to befuddle newcomers, the animals replay bits of their 2005 journey to Madagascar in the company of penguins and chimps. Then the whole menagerie attempts to fly a salvaged plane back to New York but crash-lands in Africa instead.

This should be where the adventure opens up like the plains of the Serengeti. Visually, the film certainly impresses with its sweeping landscapes. But its story is a flat, forgettable retread: Reunited with his family (insert reference to "Roots"), Alex must thwart a scheming alpha lion (Alec Baldwin), earn the respect of his father (the late Bernie Mac), and rediscover his place in the world along with his friends. Not even Cohen's kooky lemur king can rescue that tired plot.

"Madagascar: Escape 2 Africa" is directed by Eric Darnell and Tom McGrath, the same pair that helmed the original. This time, Darnell and McGrath share screenplay credit with Etan Cohen ("Tropic Thunder" co-writer; no relation to Sacha). They introduce a few new characters (rapper will.i.am is the deep voice of a hippo with the hots for Gloria) and they find ridiculous uses for some old ones (Nana, the feisty New Yorker who shows up as a handbag-wielding tourist on safari). It doesn't much matter whether or not they hit their marks. "Madagascar 3" is reportedly already in the works.