In 'W.,' Oliver Stone frames his biopic as a provocative and uniquely American tale of family politics 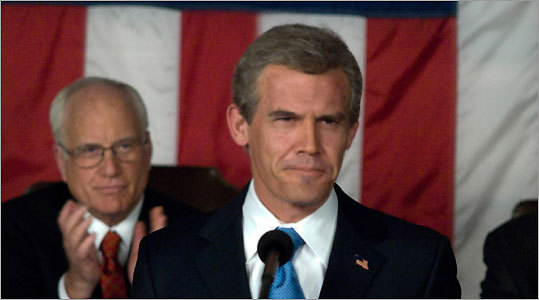 Is there an easier target than a lame duck? "W.," the first biopic ever made about a sitting US president, is either two years too late or 15 too early. George W. Bush hardly seems to matter anymore; attention has shifted to the two men who are vying to clean up the mess his administration has left behind. As it should. Who needs more Dubya taunting when there's work to be done?

The irony is that Oliver Stone is aiming for something rather different here, and the results still feel tentative. For his third "president" film (the others being "JFK" and the much-underrated "Nixon"), the lightning-rod director casts the life of the 43d commander in chief as a peculiarly American tragedy: The story of a child of privilege who's also the family screw-up, whose aching need to prove himself to his father delivers his country into the hands of ambitious and predatory men.

Her confusion will be shared by many - partisans of the left will never extend compassion to George W. Bush and those on the right don't want this kind of sympathy - but it's a novel approach, and when it works, "W." can take your breath away. When it doesn't, you can feel Stone still working out his feelings toward the man. There's a lot of Charles Foster Kane in "W.," and some of Shakespeare's Richard II. There's also more than a little Oliver Stone.

Josh Brolin ("No Country for Old Men") plays the president, and it's an honorable performance, wholly lacking in cheap shots. (The soundtrack full of tinny pomp-and-circumstance tunes picks up that slack.) This Dubya is simple rather than simple-minded, a good old boy who acts first and thinks later, if at all. He's a decent sort, spoiled but likably cocky, and his biggest flaw is that he doesn't have the skills to articulate what's eating his insides out.

That would be his father, George H.W. Bush, played by James Cromwell ("L.A. Confidential") as a patient but peremptory blueblood king. Dubya knows he'll never measure up to Poppy's standards - so does Poppy and so do we; anyway, brother Jeb (Jason Ritter) has been anointed heir apparent - and the frustration turns him to drink, rebellion, God, and politics, in that order.

"W." unfolds in two collage-like narrative streams: The series of White House meetings in 2003 leading up to the Iraq war and flashbacks to the many stages of George W. Bush's past. The former are where Stone pulls out the stops, and they are marvelously comic works of pseudo-history, cobbled together from the published memoirs of those who were there.

The casting here is downright fiendish: Scott Glenn as a fatuously double-talking Donald Rumsfeld ("The absence of evidence is not the evidence of absence, Mr. President"); Bruce McGill as a phlegmatic George Tenet; comedian Rob Corddry as press secretary Ari Fleischer; Toby Jones (the other Capote) as a munchkin Karl Rove; Dennis Boutsikaris, a schlumpy Paul Wolfowitz. Thandie Newton's Condoleezza Rice is the closest the movie comes to "Saturday Night Live" caricature, but it's a cruelly brilliant cartoon nonetheless, a symphony of awkward postures and nasal speech patterns.

Two of the president's men stand out: Secretary of State Colin Powell (Jeffrey Wright) and Vice President Dick Cheney (Richard Dreyfuss). The latter is a gray eminence on the sidelines until he has his Dr. Strangelove moment in front of a map of the oil fields of the Middle East, uttering the chilling (and wholly unsourced) words, "There is no exit strategy. We stay."

Wright's Powell, forever counseling caution, gets the dialogue that's the heart of the 2003 scenes, though. "Why?," he asks. "Why Iraq? Why now?" Stone provides the answer in the flashback scenes, as George the son spends years twisting in the patrician scorn of George the father. Cromwell's Poppy isn't a thunderer - Barbara Bush (a live-wire Ellen Burstyn) is the emotional bad cop of the family - but his measured, diplomatic distance is, if anything, harder to live up to.

"W." says W. would do anything to gain this man's respect, and after Saddam Hussein and the 1992 election humble the elder Bush, the prodigal son spends years planning his revenge. The tragedy, as Stone sees it (and he's hardly alone), is that the country and the world are still paying for our president's daddy issues.

Cheapjack Freudianism? Arrant fantasy? Certainly. Provocative and rudely entertaining? More than you'd think. Because "W." wants us to understand the man, though, Stone pulls his punches in ways that don't always work. I appreciate the movie's non-hysterical treatment of Bush's religious conversion - out of nowhere, Stone pulls Stacy Keach to play a composite reverend figure, and the aging lion is unexpectedly touching - and Elizabeth Banks's gentle Laura Bush softens both the movie and its protagonist.

Yet the operatic tendencies that are Stone's strength and weakness as a filmmaker are muzzled here, and it may be that this psychodrama hits too close to home for a filmmaker known for his own struggles against a larger-than-life father. Late in the film, there's a dream sequence in which Bush Sr. lets his wayward son have it right between the eyes, right in the Oval Office. It's a striking moment, but it doesn't carry the devastating impact - the Olympian fury toward one man's betrayal of family and nation - that it aims for. Stone's pity for his subject ennobles the film and hobbles it at the same time.

"W." shudders to a halt a few scenes later, its anger unresolved. Leaving the theater, you may have the sudden sense that, really, it is too early for this movie to have been made, as sharp and as complicated as some of its pieces are. Historical perspective takes years. So does therapy. You be the judge of which we'll be needing more.