Actor scoffs at getting plum roles - then lands them 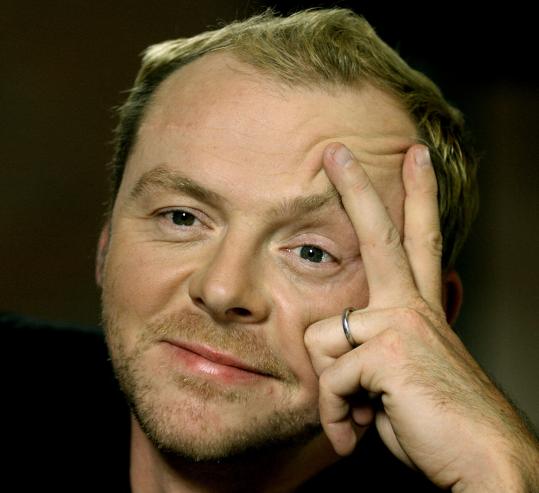 Simon Pegg (above) visited Boston last month to promote ''How to Lose Friends and Alienate People.'' His breakthrough came in 2004's ''Shaun of the Dead'' (below, with Kate Ashfield). (Bill Brett for the Boston Globe (above); rogue pictures)
By Justine Elias Globe Correspondent / September 28, 2008
Text size – +

Never, won't, and can't are magic words for Simon Pegg. Whenever the British actor makes an unlikely, even ridiculous prediction, it seems the opposite occurs.

When a hometown fan asked him, just after the surprise success of the zombie comedy "Shaun of the Dead," if he was "going Hollywood," Pegg shot back, "It's not like I'm going to go away and do, I don't know, "Mission: Impossible III." A few months later, J.J. Abrams, newly signed on as the director of "M:I III," telephoned Pegg's office and offered him a small role in the Tom Cruise spy sequel. In his breakthrough British sitcom "Spaced" (now available on DVD), Pegg, playing a comic-book store clerk, bewailed the "Star Trek" movie curse: All odd-numbered sequels to the 1979 movie, he says, "as sure as day follows night," turn out terrible.

It may be the time for another wild forecast.

Pegg's new film, "How to Lose Friends and Alienate People," an adaptation of journalist Toby Young's best-selling memoir, has drawn comparisons to "The Devil Wears Prada." In it, he's a shambling, often soused London journalist, staggering through the uptight Manhattan media world. "Simon makes you believe that this guy's rudeness is actually a kind of charm," says the film's director, Robert Weide. "He reminds me, the way he comes across on film, of Hugh Grant. If this movie does for him what 'Four Weddings and a Funeral' did for Hugh Grant, I'll be very happy."

Young, now back home in London and, he insists, far more discreet than his screen incarnation, is delighted by Pegg's portrayal of his younger self. "Simon has an innocent quality that makes you love him no matter what."

This makes Pegg smile. "Toby would use the word innocent. He looks, in real life, like a giant baby." But the next Hugh Grant? Pegg is horrified to hear this. Not least because he used to make fun of frothy romantic comedies.

At the urging of his mother, Pegg, who was born in Gloucester, England, got his acting start in community theater. He made a name for himself as a peroxide-blond, goatee-sporting stand-up comedian. Britain's thriving 1990s stand-up scene led to a crossover into TV sketch comedy shows, and then to collaboration with fellow performer Jessica Stevenson Hynes, the co-writer and star of "Spaced." That sitcom became a cult hit in the US (its fans include Quentin Tarantino and Trey Parker), which brought Pegg to the attention of Hollywood.

One of his first post-"Spaced" roles: a small role in HBO's "Band of Brothers."

"Stop it. Nobody noticed me. Even my mum had trouble picking me out. Everybody was basically a glorified extra, wandering through the background of a shot," says Pegg. Because he was one of the last actors cast in the epic miniseries, he didn't participate in the mock boot camp, which had the actors "drilling at 5 a.m., hiking 10 miles with packs on, that sort of thing - I thought, 'Come on, this is supposed to be acting, we don't have to actually do it, do we?' "

Though Pegg says he doesn't read much celebrity journalism, he does think that Young's book was prescient. "Toby was writing in the mid 1990s about publicist-controlled magazines, about writers wanting to become part of the world they were covering," he says. "There's some of that in the world of bloggers, the ones with their photos above the column - 'Hello! Look at me in the picture - spurning and criticizing those who want to be famous, all the while trying to be famous as well.' Like they're the snake eating itself."

Has the "Alienate People" role made him a more astute reader of the glossy magazines? "Maybe. One of the British magazines did a retrospective of all their covers," he says. "All men, male role models, or celebrities on the cover, until one cover, a girl in a bikini. Afterward, all cheesecake shots. Clearly that one girl in a bikini issue sold well."

In several published interviews, Pegg has expressed an almost fatherly concern for his sexy costar, Megan Fox, who plays a steely-eyed starlet. "Megan is in danger, in this stage of her career, of being surrounded by people like that, the ghostly figures who create a brand. But then, that's what sells magazines, I guess."

Now that his own face is on magazine covers, Pegg's life has changed. He tries to maintain his family's privacy (he's married, but doesn't talk about his wife or her career in interviews). He's not a complainer, he insists, but says one of the downsides of his success was not being able to revel incognito in a second visit to the annual ComicCon festival.

A lifelong science fiction and comic book geek, Pegg says he's "encyclopedic about certain things, but not to the point of, you know, of making costumes for myself."

Upon the US release of "Shaun of the Dead," Pegg, fellow "Dead" actor Nick Frost, and writer-director Edgar Wright - then mostly unknown in this country - promoted the movie at ComicCon and then spent several days shopping, seeing movies, "just hanging out - it was heaven." (How much of a sci-fi geek is Pegg? He'll happily interrupt discussion of his latest film to extol the virtues and flaws of the various "Star Trek" spinoffs - and the Borg babe Seven of Nine. One "Star Trek" he can't discuss: "Star Trek XI," the movie in which he plays engineer Montgomery "Scotty" Scott.)

This summer, when Pegg returned to San Diego with Wright and Hynes to do interviews for the "Spaced" DVD set, he was a full-fledged star, recognized everywhere he went. Desperate to drink in the ComicCon experience, Pegg borrowed a mask of Batman's nemesis, the Joker, and wandered the convention hall unnoticed - a clue to how many other fans were in costume. "It's the most unabashed display of enthusiasm you could get," he says. "People go and can totally be themselves and are applauded for it. It's just a joyous, heartening place to go."

Sci-fi love - and loathing - is always a fresh subject for Pegg. Recording new commentary tracks for "Spaced" was yet another chance to rehash the "betrayal and pain" of the last seven "Star Wars" films. "I can't even begin to describe the hurt," says Pegg, his eyes clouding over. "Never speak to me of Ewoks."