As the protest turns 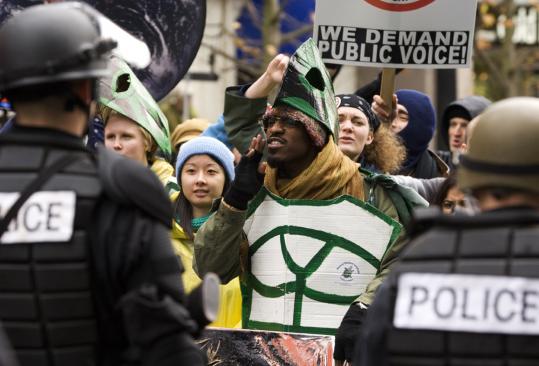 In "Battle in Seattle," actor-turned-writer/director Stuart Townsend applies the docu-fiction model to the street protests that rocked the title city when the World Trade Organization came for a visit in late 1999. A big cast playing characters representing all sides of the conflict, busy handheld camerawork, a tick-tock time structure, actual news footage interleaved with the acting: It worked for Paul Greengrass and "Bloody Sunday" in 2002. Not so much here.

The chief culprits are Townsend's TV-movie characterizations and a very muddled message. The filmmaker clearly lionizes the anti-globalist protestors and sees them as activist new age heroes. So why do we come away from his film convinced they're naive children?

The subject's fresh and righteously progressive enough to allow Townsend to call in heavyweight friends. In the film's most nuanced performance, Woody Harrelson plays a nice-guy Seattle riot cop whose pregnant wife (Charlize Theron) gets caught up in the mayhem and who takes out his anger in the wrong places. Ray Liotta, complete with politician-hair, plays Seattle Mayor Jim Tobin, frantically trying to keep the peace as the media and the state's governor (Tzi Ma) force his hand to call in the National Guard.

Connie Nielsen is cast as a news reporter whose political conversion is awkwardly handled; Channing Tatum and Joshua Jackson are on hand as, respectively, a cop and a cameraman. If there are heroes here, they're those who've arrived at the WTO conference from abroad, hoping to speak truth to profit-mongering. Isaach De Bankol is a businessman who wants to spotlight the needs of poor African countries, while the fine Croatian actor Rade Serbedzija plays a Doctors Without Borders medic desperate to present his AIDS research findings. As the activism turns violent, he finds himself without an audience.

The uncertainty extends to the final scenes that show the Third World participants shutting down the talks from within while the activists outside take credit for it. We're meant to share in the triumph, but it doesn't square. What happened in Seattle in December 1999 needs a movie made about it, all right: a documentary directed by someone who knows exactly where they stand. Preferably on the outside.