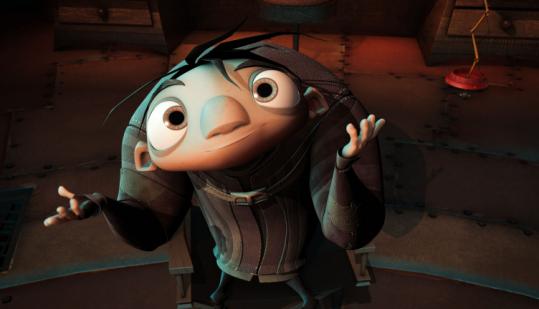 You can't blame John Cusack for jumping at the chance to play Igor.

By any name (including Fritz and Riff Raff), the mad scientist's assistant is one of the great movie scene-stealers of all time. He was showbiz gold even before Marty Feldman killed audiences with his comic genius as "Eye-gor" in "Young Frankenstein."

So if you're Cusack, and you know you're far too cute to ever play Igor in the flesh, it's not hard to see why you'd lend your voice to an animated film that puts the hunchbacked servant front and center. It's just hard to see why the film isn't better.

"Igor" is directed by Tony Leondis ("Lilo & Stitch 2") and written by Chris McKenna (TV's "American Dad"). It's rated PG, so presumably it's not going after the littlest horror fans anyway, but if any should wander in with their parents, they'll probably be more bored than scared.

This is a movie that, much like the monster it creates, has no idea what it was meant to be.

"Igor" isn't dark or twisted or sharp-witted enough to excite horror fans looking for inspired parody (except for the fantastically wacky final act, but more on that later), and it's also not cuddly/amusing enough to be embraced by the "Shrek" crowd. The film's muted landscapes lend some intrigue, but its characters, artfully drawn as they are, seem like an odd combination of Tim Burton castoffs, Venetian party masks, Wii-friendly game pieces (in stores now), and, in the case of the monster, somebody's warped idea of Raggedy Ann meets Delta Burke.

To convince you that it's full of surprises, the movie throws in Louis Prima songs where they don't belong, and it riffs on classic monster-movie cliches (blind orphans, busty maidens, "yesss, mahster" moments . . .) mostly by spinning them into newly unfunny cliches.

The familiar story gets a few mildly interesting tweaks: In the kingdom of Malaria, as in Terry Pratchett novels, Igor is the generic name for lab lackey. Cusack plays a baby-faced Igor who unconvincingly longs for his own chance to invent evil. Unfortunately, the monster that Igor accidentally commands has the voice of Molly Shannon and more interest in musical theater than in evil-doing. Saddled with this softy, how will Igor triumph over sinister Dr. Schadenfreude (Eddie Izzard) and his equally sinister girlfriend (Jennifer Coolidge) to win the Evil Science Fair? He gets bumbling help from a mangled, suicidal rabbit (Steve Buscemi) and the obligatory dimwitted brain in a jar (this time given wheels and the voice of Sean Hayes).

None of that story lives up to its spoof potential, though it does lead to a superbly demented finale that has the monster going berserk during a production of "Annie." The movie finally comes alive in that moment. If only somebody had flipped the switch sooner.