A farce among friends

In "Another Gay Sequel: Gays Gone Wild," the abs come in packs of six, eight, and 12; the sex could put your eye out; and the venereal crabs - I can't stress this enough - have their own animated musical number.

Todd Stephens's film is a follow-up to his "Another Gay Movie," but neither is really needed to spoof gay movies, since the average gay movie is pathologically predisposed to do that for itself.

This time four friends (our heroes) are whisked from California to Fort Lauderdale, Fla., for spring break, where they enter a Gays Gone Wild contest. The winner is the spring breaker who has the most sex. (I don't remember the words "college" or "student" being used; and most of the men here look old enough to be, um, professors.)

What drops out of this flaming piñata of a plot? A bewigged, oversassed RuPaul; Krazy Glue swapped for lubricant; one gaggle of simpering prisses called the Jaspers; a merman; a Cuban virgin; drag superstar Lady Bunny armed with a Super Soaker; and some accidental incest. There's an epic vomit sequence, a funny joke about Asbury Park (one about gentrification, silly), and an occasional emotional breakthrough ("As much as a slut as I may actually be, you're the first guy I ever kissed"). And there are frequent mentions of gay websites (sponsors?).

The Larry Kramers in the house will want to condemn this farce as a sign of apolitical ignorance. The impulse is understandable. In that spirit, Perez Hilton, the gossip blogger, has been hired to play himself under a religious spell, denouncing the slatternly and the bad name they give the gays. He's hardly Larry Kramer, but the moralizing here is a joke too.

Stephens's movie is lewd and cheap and suffers from multiple-personality disorder (part soft-porno, part sitcom, part Hallmark card). But the relentlessness and lack of inhibition are sub-John Waters funny - and a corrective to the gay suffering and homophobia in other movies. There are no closets and no shame here, even if some blinds would be welcome. 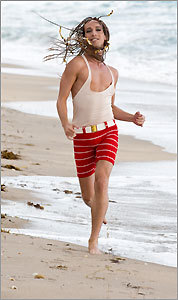 Written and directed by: Todd Stephens