In 'Family,' an affair to remember 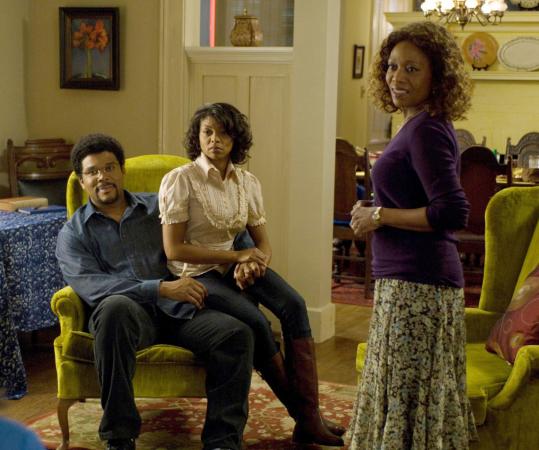 Tyler Perry has to be the luckiest director on the planet. No matter how limp his movies can get - and "Tyler Perry's The Family That Preys" may be the limpest yet - he can always count on a devoted fan base of church ladies, their daughters, and the men who love them. Those fans applauded mightily when the end credits rolled after the first screening on opening day ("Family" wasn't pre-screened for critics) partially because they know nobody else is making movies for them.

When Perry's really cooking, he can mix broad comedy with African-American domestic drama in ways that speak directly to his audience. "Family," sadly, is a plate of leftovers: a bland, baldly written melodrama about two longtime best friends and their messed-up families.

Kathy Bates plays Charlotte, the eccentric but wealthy owner of an Atlanta construction firm, while Alfre Woodard is Alice, a God-fearing diner owner and superego to Charlotte's id. Most of the torturous plotting takes place one generation down, as Alice's nasty daughter Andrea (Sanaa Lathan) thinks a business degree entitles her to cheat on her blue-collar husband (Rockmond Dunbar) with her boss, who's also Charlotte's high-powered-executive son (Cole Hauser, giving a robo-performance). Perry appears to be channeling the old Joan Crawford classic "Mildred Pierce," with its viper-tongued daughter played by Ann Blyth. Lathan's no Blyth, but she still gives good Veda.

There's a good daughter too, played by a great actress, Taraji P. Henson ("Hustle and Flow," "Talk to Me"). Her character, Pam, represents everything solid and loving in the black middle class, and Henson gets you to believe it by never overselling the part. Perry himself plays her husband, a goodhearted but ambition-shy construction worker, and one of the many life lessons here is: Ladies, gently nag your man to be better than he thinks he is.

Too much of the dialogue has to do with the ethics of money and business, though, and you start to wonder if Perry's commercial success may have freaked him out a little. Worse, he's still not much of a filmmaker, and "The Family That Preys" is shot, lit, and blocked with dull borderline competence. A cheesy synthesizer score cheapens the proceedings further: The movie plays almost exactly like four daily soap episodes stitched together.

The church ladies don't care. For them, the only way "Family" could have been improved is if Perry's cross-dressing alter ego Madea had showed up to kick Andrea's sorry butt. (She gets her own movie, "Madea Goes to Jail," in early 2009.) As it is, the audience I was with cheered when Andrea's long-suffering husband backhands her upon learning of her infidelity. "Hit her again!" called the sweet old lady two rows behind me. Could this be Tyler Perry's vigilante movie?

Tyler Perry's The Family That Preys