The jokes are as flat as the beer in 'College' 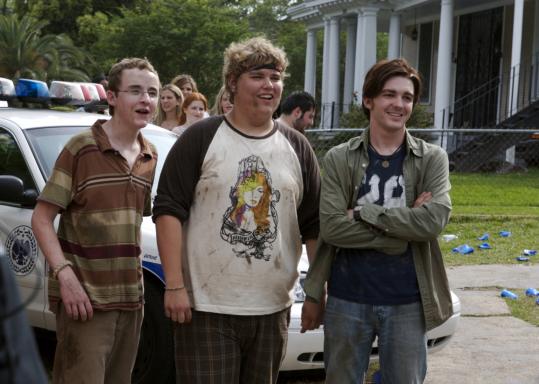 It's only right that the end of the summer movie season leaves crumbs at the megaplex. And setting a comedy at a frat house should make you slightly more tolerant of its looking like it was found between the cushions of a hand-me-down couch. But even by those standards, "College" is wrong. The grime, filth, slop, vomit, and crotch-nibbling pigs double all too easily as a recipe for this movie's failure. It hasn't been made so much as excreted. Things never get better than the movie's poster, which features a kid with his head in a toilet. Incidentally, that image doubles, concisely, as apt film criticism.

Most movies recall college for the keg stands, body shots, and barely suppressed homoeroticism, and that's OK. But the memories here seem like another movie's. It's another trio of party-faring high school seniors - one nervous and skinny (Drake Bell), one obnoxious and fat (Andrew Caldwell), one ultra-geeky (Kevin Covais) - and a series of embarrassments at the hands of frat boys. Why is none of it funny? Because we've already seen "Superbad," and "College" is less a remake than an amateur production of a bootleg copy of same - something you'd find on a folding table near a bus stop.

The sinking sense that college is a cesspool could have been some kind of amusing joke if the director, Deb Hagan, or the writers, Dan Callahan and Adam Ellison, knew how to tell a joke. The frat bullies' big comeuppance might have felt good, too. But even that is like having your face rubbed in somebody's armpit. I didn't care for the boys and their boilerplate social ambitions. I was worried for Caldwell, though. He screams his lines until he's hoarse, seemingly so desperate to capture that Jonah Hill feeling that he appears to be risking his health to do it. Really, I felt worse for other stuff, like the hundreds and hundreds of plastic party cups injured in the making of this movie.