It's all about face

Untouched by Botox or plastic surgery, Melissa Leo's looks in 'Frozen River' put a wrinkle into the relentless pursuit of youth 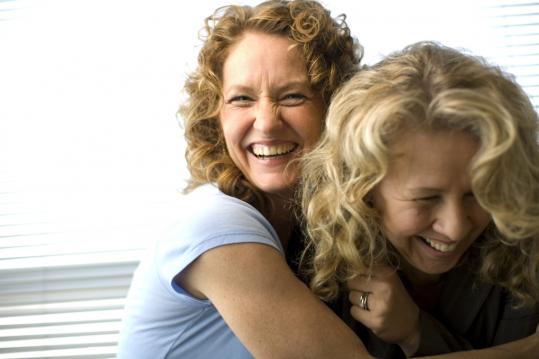 The face in the photograph that accompanies this story is Melissa Leo's. Leo is an actor and her face, unlike some of her far more famous peers, is naturally aged. Cosmetic tinkering doesn't do it for her. "I'm not that kind of girl," Leo said recently during a blunt and boisterous conversation in a downtown Boston hotel. "If they need to have bigger boobies, then I can just stuff the bra. I have definitely lost work over the years because my chest isn't bigger than it is and because I don't have platinum blond hair."

For most of this decade, Leo has been playing women whose age falls somewhere along the spectrum of 40. (She's 47.) And if you caught her as Benicio Del Toro's beleaguered wife in "21 Grams," you're aware that Leo can exceed the spec trum. Watching her in a film or on television, where she's best known for the four seasons she played Detective Kay Howard on "Homicide: Life on the Street," you're struck first by her steeliness and next by her unvarnished packaging. That face has an amazing and unlimited capacity for solemnity, grief, despair, and rage.

They're all on display in "Frozen River," a kind of dramatic thriller that opened Friday in the Boston area. The movie marks the first the time Leo is the main attraction. And the ample praise being heaped upon her lack of glamour might seem disproportionate with her assignment: For Pete's sake, she's playing a poor mother of two in the wintry climes of way-upstate New York. Has no one heard of realism? But if you've been to a movie lately, you know what an un-nipped, untucked, Botox-free miracle that face is. When a naturally beautiful Charlize Theron goes to sleep dreaming of how to deglamorize herself, it's Leo's face she sees.

"I don't know why actors would do that to themselves," she said. "When I heard about Botox and that you would inject something into your face that would make it freeze," she said, taking a long pause for comic emphasis. "That's kind of the opposite of what we're supposed to do, isn't it?"

The first thing first-time writer and director Courtney Hunt does in "Frozen River" is send the camera traveling along Leo's body up to her face, where it sits in almost loving tribute to the years it's accumulated. What's remarkable about it is not the age in the actor's face. It's that the face has been permitted to act its age.

In the movie, Leo plays Ray. The character's deadbeat husband is AWOL. The last payment for her new doublewide is urgently due. And it's almost Christmas. Push comes to shove, and shove leaves her teamed with Lila (Misty Upham), a dour, young, equally cash-strapped Mohawk. Together they smuggle illegals across the border from Canada for $1,200 per trip. Leo does not try to look terrible. In movies, she just tends to look the way a lot of working women can from time to time: like they need a vacation.

"Frozen River" presents a lot of things we rarely see in a movie. A beleaguered protagonist in her 40s is the tip of the iceberg. The film is more explicitly about the working poor, which is something else the movies scarcely show with much realism. It deals with race and the privilege of whiteness. More than half the characters are Native American. There's no love story - just the bond between mothers and their children. And Ray and Lila are an unglamorous pair (one looks ravaged and is rail thin; the other is stocky with pimples). Hunt doesn't belabor any of this, but, commercially speaking, she was aware of the taboos. She just treated them as facts of life, particularly the class issue, "We're afraid of poverty like it's something to be ashamed of," she said, sitting next to Leo during an interview. "Nobody ever says that. But I'm always having to scream about it."

Leo and Hunt came to Boston together. And if they seemed like a pair of girlfriends, it's because they are now. At a film festival screening of "21 Grams" in 2003, Hunt walked up to Leo as a civilian (she's a lawyer who also went to Columbia University's film program). She told Leo she liked her performance and asked if she could send her a script for a movie. But on the way home Hunt's husband suggested she send Leo the "Frozen River" script, instead.

"That's the short version," Leo said. Hunt recalled that Leo would frequently check in to find out how the financing for "Frozen River" was going and to offer encouragement. Leo knew the movie was special both on its own merits and in terms of giving the actor a more meaningful professional challenge.

For years, Leo says, no one would hire her because they didn't want Kay Howard in their movie. "Uh, I'm not Kay Howard. I'm Melissa Leo," she said with some amusement but also a hint of resentment. Television is suddenly loaded with Kay Howards: for example, Kyra Sedgwick on the "The Closer," Marg Helgenberger on "CSI," and Mariska Hargitay on "Law & Order: SVU": loosely masculine but occasionally vulnerable women of the law. The trend "makes me proud and heartsick at the same time," she said.

But the vagaries of Hollywood casting never cease to amaze Leo. After "21 Grams," she said she was offered a part on an episode of either "Criminal Minds" or "CSI." "I can't remember which one it was," she said. (It was "CSI.") In any case: "I play a white chick married to a Spanish guy, and the story was about mixed-race babies. So it's like they said, 'What white chick would be married to a Spanish guy? Oh, we know!' "

Leo has rarely had a lead role. She's never played an ingenue, coquette, or, conventionally speaking, a love interest. Early in her career she played a lot of victims. Now her resume is full of tough types: cops, waitresses, single moms. She recently got to do a turn on "Law & Order" as a reasonably glamorous woman mixed up in murder and Internet scheming, which she said was a fun break from the women she normally plays.

Is she typecast? Sure. "But then I crawl out the other side of the pigeonhole and fly for a little bit. Then they stick me in another one. But I'll get free."

If "Frozen River" doesn't permanently spring Leo from that pigeonhole, here's hoping it leads to more a deluxe one. There are hundreds of stories out there that should be thrilled to be told with Leo's face.