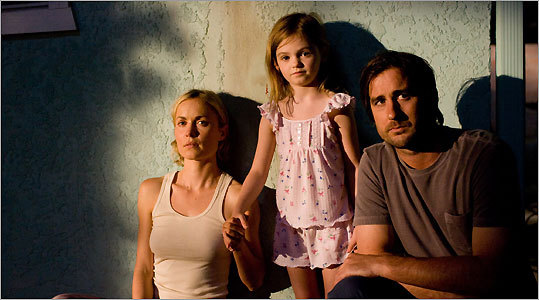 "Henry Poole Is Here" manages a fairly rare trick: It's a movie that's both deeply felt and completely phony.

Written by first-time screenwriter Albert Torres and directed by Mark Pellington ("Arlington Road," "The Mothman Prophecies," many rock videos), it's a self-consciously "small" drama set in an out-of-the-way Los Angeles neighborhood. The title character (Luke Wilson, bearded and glowering) appears one day and buys a shabby stucco house down the street from his childhood home. He proceeds to start drinking himself to death, fueled by a source of anger revealed during the course of the film.

Henry has lost all hope, see, but the woman next door (Adriana Barraza of "Babel") is conveniently named Esperanza, Spanish for "hope." The radiantly pretty, conveniently single mom on the other side is named Dawn (Radha Mitchell). Even the supermarket check-out girl's on his case: Her name (conveniently) is Patience (Rachel Seiferth).

Oh, and Jesus Christ himself turns up in a water-stain on the side of Henry's house. This development brings the devoutly Catholic Esperanza first to her knees, then to fetch her priest (George Lopez, wearing what for him amounts to a restraining collar). Henry, wallowing in self-pity, will have none of it, and in his defense, the stain really looks more like the Zig-Zag rolling papers guy. But then the miracles start happening.

OK, then. This is interesting: A parable on faith that only gradually tips its Christian hand. "Henry Poole Is Here" is far from evangelical, though: It's a gently spiritual inquiry aimed at doubters. Such things are not unwelcome, especially coming from Hollywood. They just need to be a lot better made than this one is.

There's not one moment in "Henry Poole" that feels natural or unforced - remarkable for a movie that misperceives itself as a work of indie realism. Torres's idea of working-class dialogue is to have the characters mutter self-consciously; some of the actors run with it but Wilson flails from beginning to end. A further warning sign: Dawn has an adorably precocious 6-year-old daughter named Millie (Morgan Lily), who wanders around tape-recording the adults, playing back their conversations as a sort of group insta-therapy. Why she's not named Dramatic Closure I have no idea.

Perhaps the movie's worst sin is its reliance on pop music - specifically, downer alt-rock ballads - to cue emotions the filmmaking's too inept to foster on its own. Time and again, Pellington slams the movie to a halt for a mopey montage scored to an Eels or Badly Drawn Boy song, and by the fourth or fifth time, you're groaning. This isn't directing; it's playlisting.

According to recent articles, the filmmaker has weathered some family tragedies and sees "Henry Poole Is Here" as a way to reprioritize - to talk about the things that matter. You're allowed to feel for him and still wonder why the results feel so airlessly over-determined whenever Hollywood filmmakers try to "get real" in films like "Crash" or 1993's "Falling Down" or this one.

Maybe living in the film industry's hall of mirrors fosters an inability to tell a story straight, without calculated pre-chewing. Maybe filmmakers like Pellington have lost the knack for letting a narrative organically unfold. Maybe he just needs to get out of LA. One thing's certain: To make a movie about the necessity of faith, it helps to have a little in your audience.