'Boy A' considers crime and consequences 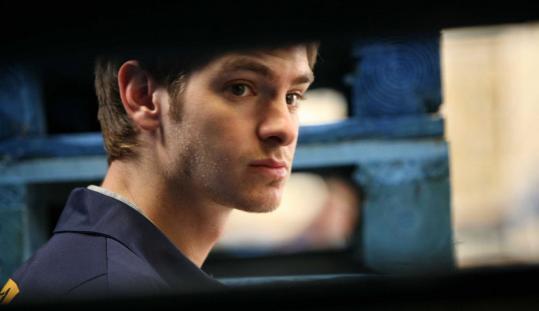 "Boy A" comes frustratingly close to succeeding as tragedy. It introduces us to a meek young Englishman named Jack Burridge (Andrew Garfield) who has just been released from prison and relocated to Manchester after serving time for his part in a murder he and a pal committed as boys. We're also introduced to more string-pulling symbolism than a movie this inherently sad ever needs. It's too much.

In the first scene, Jack's caseworker, Terry (Peter Mullan), gives him a pair of Air Escapes, calling his attention to their meaning. The shoes work for a little while. In Manchester he gets a job at a delivery company. He makes a couple of friends and starts dating a co-worker, Michelle (Katie Lyons). Each of these new relationships is predicated on lies: His actual name is not Jack (during the trial he was called Boy A). He was not arrested for stealing cars. Those front-page stories decrying a murderer's release from prison are actually about him.

And what the movie tries hard to illustrate - and does to some extent - is how those headlines and that murderer are no longer who Jack is. The young man Garfield plays is a wincing, embarrassed, guilty soul desperate for a second chance. The film bypasses the moral question of whether he deserves one and tries generating suspense out of whether that type of redemption is even possible.

Flashbacks to Jack's troubled childhood (Alfie Owen plays the character as a boy) and his incriminating friendship with a little psycho named Philip (Taylor Doherty) interrupt the present-day action. The real suspense is whether director John Crowley and Irish playwright Mark O'Rowe, adapting a novel by Jonathan Trigell, can gracefully conjoin the two selves - the corrupted innocent and the rueful adult he's become. Not quite.

Crowley and O'Rowe don't seem to trust the bad news to resonate on its own. So they tip us off - those sneakers, the Hollywood tragedy of "A Place in the Sun," which plays on TV at some point, the need for a fellow train passenger to tell Jack, in a despairing moment, that he's reached the end of the line. Terry's estranged son (Anthony Lewis) appears apparently only for the melodramatic climax.

Nonetheless, the movie is worth seeing for Garfield. He had a smallish part as the entitled American student Robert Redford lectured in "Lions for Lambs." The tortures are different this time. Jack is morally rehabilitated but emotionally broken, occasionally at odds with the violent nature that got him into so much trouble in the first place. He's both desperate to connect to loving people and nervous that at any moment the connection could be snapped.

Everything Garfield does for the character dramatizes that awareness. He hides his face, averts his eyes, contorts himself. The narrative concoctions seem particularly unnecessary when he and Mullan are together. A lot of those scenes consist of the older, wiser man reassuring his fragile charge.

While Jack is high on ecstasy in a nightclub, Garfield does a beautiful, jerky dance that falls somewhere between eloquence and convulsion. He's both in pain and at peace. It's mysterious why "Boy A" insists on hyperventilating signs when it's built around a performance as fine as this.

Written by: Mark O'Rowe, adapted from the novel by Jonathan Trigell