"Do the words 'Rest in Peace' mean anything to you people?" asks someone during the course of "The Mummy: Tomb of the Dragon Emperor." Apparently not. Nine years after the first big-budget action "Mummy" and seven years after its follow-up comes this jokey, frenetic, overproduced three-quel. Despite plenty of post-"Pirates of the Caribbean" zombie mayhem, it's strictly for kids. And for Brendan Fraser's bank account.

The star is just about the only person left from the 1999 original, but his dudacious charm is wearing thin as adventurer Rick O'Connell once more steps into the breach of the undead. Egypt having been plundered in previous installments, the action moves to China, where the ancient kill-crazy Emperor Han (Jet Li) has been dug up along with his terra-cotta army.

Arrayed against him are Rick, his wife, Evelyn (Maria Bello takes over for Rachel Weisz, wielding a simply teddible British accent), their college-age junior explorer son Alex (Luke Ford), Evelyn's nervous-nellie brother Jonathan (John Hannah), a beautiful 2,000-year-old witch (Michelle Yeoh), and her daughter (Isabella Leong). Needing to drink from the pool of eternal youth, the villain leads them all to Shangri-La high up in the Himalayas.

Better they should have looked on the Universal back lot, since Fraser and Bello seem ridiculously young to be Ford's parents. The script's limp intergenerational arguments come off as sibling rivalry.

That's right, the Abominable Snowman and friends put in an appearance, the only time the film threatens to become entertainingly daft. The rest is prodigious big-budget waste, expertly crafted, and instantly forgettable. The sense of missed opportunity extends to the presence of Jet Li, who, despite some poorly shot fight scenes, mostly stands around snarling in rotting-clay makeup.

Why hire one of the great stars of Hong Kong martial arts movies and give him nothing to do? Maybe they can solve that mystery in the next sequel. It should feature Brendan Fraser beating a mummified horse. 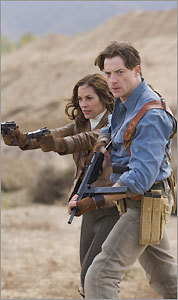 (Jasin Boland) Maria Bello and Brendan Fraser in "The Mummy: Tomb of the Dragon Emperor."

The Mummy: Tomb of the Dragon Emperor