'Swing Vote': An election for dummies 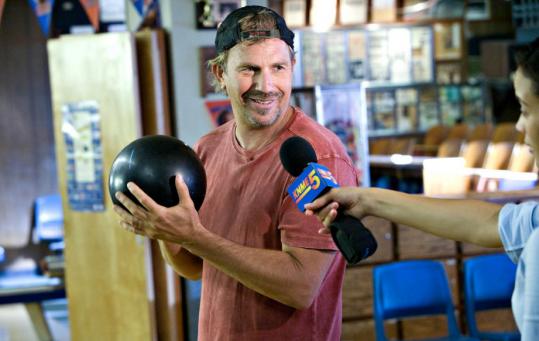 With several months left before the presidential election, "Swing Vote" arrives to remind you what's important. The movie goes on and on about honesty. Illegal immigration, gays in the military, and abortion all come up. But to paraphrase a successful presidential campaign: It's the screenwriting, stupid.

"Swing Vote" is comedy about a 12-year-old who winds up voting for president because her father was too drunk to do it himself. The whole fictitious election comes down to her fraudulent vote, which, because of a power outage at the polling station, didn't count. So both campaigns (Republican incumbent Kelsey Grammer versus, of all people, Democrat Dennis Hopper) and a frenzied news media (Mary Hart, that includes you!) descend on dusty little Texico, N.M., where Bud Johnson (Kevin Costner), a single dad and factory worker, and his daughter Molly (Madeline Carroll), live in what passes for poverty in the movies - a modest house full of nicely art-directed clutter.

The ensuing activity - 10 days for the recently fired Bud to pretend to have cast the original vote, make up his mind, and pick a winner - puts a dolt in the lap of the American political machine. Or is it the other way around? Neither side seems all that comfortable with their assignments. The folks running the respective campaigns - Nathan Lane (blue) and Stanley Tucci (red); neither in top form - don't understand Bud, and Bud doesn't understand the issues. Nor does he care to vote, which is fine with us. But he's an embarrassment to Molly. His crimes include being oblivious to what "civic responsibility" even means, and it really burns her up.

Molly is basically raising Bud. She wakes him up with breakfast every morning, drives him home from the bar, and leaves him notes urging him, more or less, to be a father. This is social tragedy presented as tidy sitcommery. As Molly, Carroll furrows her brow and juts out her mouth to make us see a plucky little woman rather than someone more pitiful. The movie italicizes, bolds, and underlines her self-sufficiency, along with everything else. The night Bud forgets to vote he smacks his head on a sign that reads, "Vote today." In a display of restraint, the director and co-writer Joshua Michael Stern declines to have him hold up a sign saying, "Ouch."

When the local reporter (Paula Patton) asks Molly what she'd like to do for a living, Molly says "veterinarian or chairman of the Fed." Not to be all social services, but you have to ask how a girl who barely knows her mother and has a useless father turns out to be such a well-adjusted angel and judgmental patriot. There is the fact that she's the daughter of a Kevin Costner character, and while the star has played his share of lovable losers, this one is unworthy of his redemptive charm.

"Swing Vote" is a satire that's afraid to satirize. It's predicated on so many forces of incompetence converging in a single spot that it feels like farce for dummies. A movie about two presidents and their operators pandering to one man could have produced a withering comedy. But it's reluctant and restrained when it needs to be ruthless. The fake ads the campaigns concoct after hearing where on the issues Bud stands aren't bad. (And there's an odd marijuana motif - there's Bud, and Dennis Hopper is playing someone whose last name is Greenleaf, trying to woo a guy named Bud.)

Otherwise, the movie has no teeth, no vision, and no real insights. It also lacks a sense of modernity. It's 2008. Why are we still microwaving Frank Capra's old casseroles? The movie turns racism, class woes, and social issues into jokes instead of engaging them with intelligence, wit, or a whiff of drama. All we get are platitudes (see, every vote really does count). Many are contained in Bud's big speech at the end of the film. Before he reads it to America (with sudden eloquence), he tells someone, "Oh God, I think I'm going to puke." Me, too.

Written by: Stern and Jason Richman