New take puts movie romance at the heart of 'Brideshead' 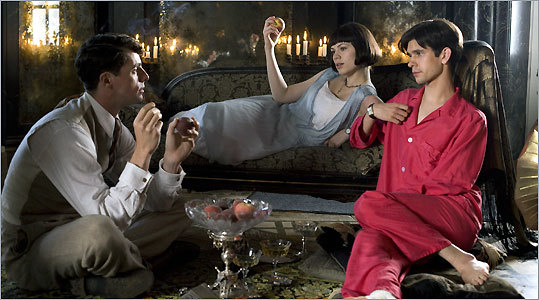 The new "Brideshead Revisited" opens with a shot of an ocean liner cutting its way through the night. Aboard, a man races after a woman he appears to recognize. She runs off but ends the chase with a hello. It's factual to say that the film has been adapted from Evelyn Waugh's novel, but the filmmakers appear to have thrown a copy of "Titanic" in among the source material.

The boat doesn't sink, just the movie. It's a fruitless attempt to mine decorousness from spiritual suffering and movie romance from religion. The film plays fast and loose with the book, until its emotional depths, spiritual conflicts, and Waugh's discreet humor have been wrung out. This "Brideshead" is a familiar story that could be interchanged with a number of ostensibly dissimilar movies until something homogenous materializes - "The English Patient's Titanic Atonement."

We start with that nautical reunion then promptly back up 10 years to explain everything. It takes a supremely involving movie to keep you from wondering how long until we get back to that boat. And depending on your tolerance for aching glances, unpersuasive kissing, poster-worthy photography, and enviable art direction, it can amount to a very long time.

"Brideshead Revisited" does have the natural human elements of Waugh's 1945 book going for it. Middle-class Charles Ryder (Matthew Goode) enters Oxford as an aspiring painter and falls immediately under the spell of Sebastian Flyte (Ben Whishaw), an effete, teddy bear-carrying, alcoholic aristocrat who, in this droll yet flamboyant incarnation, would be at home fronting any British pop group from the 1980s.

Sebastian belongs to an intensely Catholic family whose signature property - the titular manor - doubles as a kind of cathedral for the devout and the noble. Sebastian, who introduces himself by drunkenly puking in Charles's dorm, fancies the idea of modeling for his new friend, the implication being that the spell is mutual.

Sebastian whisks Charles to Brideshead where he eventually meets one of Sebastian's sisters, Julia (Hayley Atwell), a girl as sharp in youth as her flapper's bob. Sebastian summons Charles to Brideshead to impress him, and the multiple trips are a success. He falls in love with boy, girl, and real estate. And it looks like the film might bear down on the fragile emotional bond between the arriviste, the siblings, and the property. But when Sebastian sees his friend kiss his sister, you don't feel the earth shatter. The attraction between Julia and Charles doesn't have that kind of power.

The connection between the men makes the other relationships seem mechanical. The director, Julian Jarrold, oversees a nice montage of Charles and Sebastian frolicking around the grounds. There are also less than sober pecks on the mouth and skinny-dipping in the fountain. But the movie's screenwriters, Andrew Davies and Jeremy Brock, back off from any serious sexual exploration. We deduce that Sebastian is gay (his scarves are 10 times the thickness of everyone else's) and that Charles is not gay enough.

He's not Catholic enough, either. Emma Thompson, her hair piled and ashen, arrives as Lady Marchmain, Brideshead's staunch matriarch, and proceeds to invoke a fear of God in atheistic Charles (he was merely agnostic in the novel) and restore one in the fiercest two of her four children; they all make a humorous postprandial jaunt to the chapel. But here the family that prays too much together eventually falls apart. For years the lady's husband (Michael Gambon) has been living with his adoring mistress (Greta Scacchi) in Venice, in rejection of his wife's judgment and rectitude.

What's missing from "Brideshead" '08 is the philosophical glue that gives all the decadence a real quake of rebellion. The movie doesn't capture a tradition worth rejecting. The falls from grace have to land much harder in order for the returns to it to have any hope of stirring us emotionally. This is what happens when a novel's interior girding - its point of view - is discarded in favor of the external trappings, as though movies lack the capacity to burrow into characters' psyches. It's not the medium's shortcoming, it's the moviemakers'.

The film is polite but devoid of real carnal or social pleasure or real risk - the elements that thrived in Waugh's book and were loosely present in that legendarily thorough 1981 British television version of "Brideshead Revisited," with a young, irresistibly phlegmy Jeremy Irons as Charles and the superb Anthony Andrews as Sebastian."

Like Irons, Goode has a remarkable alertness. From the side, he's thin as a credit card, but there's enough going on inside him to keep Charles from being the cipher this adaptation might have settled for. Atwell, who played the actress Ewan McGregor fell for in Woody Allen's "Cassandra's Dream," never finds the conviction the end of the movie needs. She knows how to play Julia's youthful truculence but the girlishness stays with her for the entire performance.

Meanwhile, Whishaw, who was the Rimbaud Bob Dylan in Todd Haynes's "I'm Not There," seems appropriately miserable here. He's not nearly as vivid as Andrews was, but in bearing down on the character's maternal suffocation, Whishaw does give the part creepiness and sorrow that produce an unexpected movie achievement. He finds the missing link between Evelyn Waugh and Norman Bates.