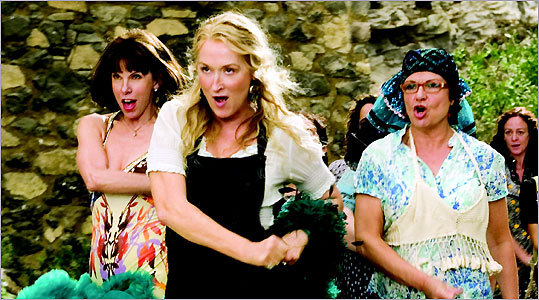 Not even a week ago I was thinking about taking the rest of the summer off. I'd already seen it all. Indiana Jones limping out of retirement? The Hulk turning into Edward Norton? Space robots in love? Then something amazing happened. Meryl Streep jumped on a bed. She leapt over and over in the slowest possible motion, like a 12-year-old girl at a really sunny slumber party. After that she marched with Christine Baranski, Julie Walters, and an army of Greek ladies in "Mamma Mia!" through the streets and down to the sea.

They're all village people. Yet they're singing ABBA's "Dancing Queen," and as much as my dignity tried to flee the premises, my heart wouldn't let me go. Watching these women line up on a dock - great actresses alongside extras - and liberate their bodies through "Sesame Street" choreography and mysterious Swedish songcraft, dignity seemed overrated. I was suddenly beside myself.

Even the banalities and dead slang of that chorus seemed like a feminist exhortation: "You can dance! You can jive!" I'll probably never be as happy in a movie theater this year. When the moment is over, there's every reason to think "Mamma Mia!" might be over, too. But the movie takes the ABBA jukebox musical that ate London, and is still eating Broadway, and turns it into a surprisingly sensuous experience.

Sophie invites the candidates - Pierce Brosnan, Colin Firth, and Stellan Skarsgard - to her wedding, hoping one of them will disclose himself. Donna, meanwhile, has no idea what her daughter is up to. She assumes these three have randomly come to her villa, and she's overcome with guilt, desire, and a whiff of nostalgia, all of which are assuaged and abetted by pals Baranski and Walters - who, in the old days, used to back her in their girl group, Donna and the Dynamos.

It takes most of the movie and about 15 unstoppable songs for all to be revealed. The lyrics may be tangential to the proceedings, but that barely matters. "Mamma Mia!" is one of the few musicals that celebrates Top 40's colonization of our thoughts.

Director Phyllida Lloyd and writer Catherine Johnson have seen to it that their movie bends toward kitsch without breaking into camp. You need a gay sensibility for camp, and while the movie is certainly, in its way, gay, the guiding energy is robustly feminine, not as a matter of politics but as a principle of pleasure. When Streep writhes and rolls around on a goat house roof to the title song, it's not unlike watching a young Madonna do "Like a Virgin" in that wedding dress: comically orgasmic. Even Baranski - half-broad, half-drag queen - performs "Does Your Mother Know" like a woman who has chewed up and spit out her share of heteros.

The filmmakers have borrowed extensively from the exuberance of Bollywood rather than the slickness of Hollywood or MTV. And while some of the numbers use a lot of cartoonishness (people crashing through and falling off things, unscathed), the really good ones culminate in genuine emotional passion. The movie is emphatically sexual without ever crossing into lasciviousness. Why be lewd when lusty will do?

The arrangements for some of the songs are pure karaoke, and all the actors sing them accordingly: a little bit drunk. Some, obviously, are better than others. Baranski belts for the back of the house, while Walters, who's even better, always seems to be going for something more intimately deranged. At the other end of the bar, Brosnan, Firth, and Skarsgard seem afraid to razzle or dazzle, though a ton of cutting and odd camera angles save them from the worst of it in "Our Last Summer," which they and Seyfried sing on a boat.

Paternity is the film's big mystery, but it's the relationship between Sophie and Donna that gives the movie its emotional center. What Seyfried lacks in emotional range is compensated for in luminousness. You would never believe her as Meryl Streep's daughter, but she's definitely Donna's.

Indeed, Streep brings out the best in everybody. Singing "S.O.S." with her, Brosnan brays through the embarrassment to some sincerely angry place. (I was laughing, then I wasn't. It's the most convincing acting he's ever done.)

Yet the movie itself brings something new out of Streep. She looks like she's having a ball, rebuking Pauline Kael's 1980s put-down that she works only from the neck up. Now her arms and hips and feet are in on the act. She's connecting with an audience in a way she never has - grinning, eye-rolling, bouncing, and, at one point, looking right at us.

Even when wrapped in a scarf and scraping the outer reaches of her voice for "The Winner Takes It All," she's astounding, selling us a droopy ballad as a wrenching piece of opera. I'll remember that moment. But it's her bouncing in joy on that bed that I'll treasure most. It's an electric image that's been 30 years in coming. The greatest actor in American movies has finally become a movie star.