Seduction and betrayal in a foreign land 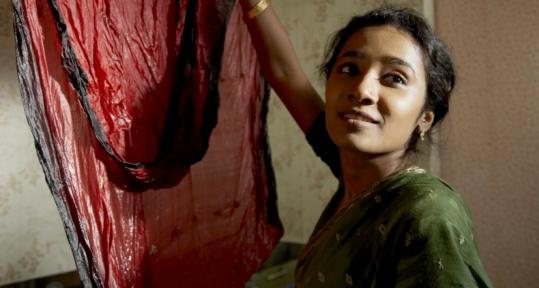 Tannishtha Chatterjee stars as a Bangladeshi woman who has been in an arranged marriage in London for two decades. (joss barratt/sony pictures classics)
Email|Print|Single Page| Text size – + By Wesley Morris Globe Staff / June 27, 2008

"Brick Lane" is one of those cultural displacement dramas full of sexual awakening and self-discovery. It means well (these movies always do), but it's as leery of the world beyond its shabby title London enclave as its heroine is. Written by Laura Jones and Abi Morgan, based on Monica Ali's novel, and directed with watchable downiness by Sarah Gavron, the movie revolves around Nazneen (Tannishtha Chatterjee), who, as an adolescent, was separated from her sister and shipped from Bangladesh to London to be the wife of an educated office functionary named Chanu (Satish Kaushik).

By the time we meet her, Nazneen has been together with Chanu for almost 20 years. She's still taciturn, bashful, and immune to the notions of assimilation that have made her daughters - a moody teenager and a tween angel - and a lot of her neighbors tentatively comfortable as Brits. Her connection to the world outside her is the seamstress work she lucks into. But this transplant life of hers has gone on so long that she feels utterly foreign to herself.

She's a shell now, the kind of wife who lies in bed patiently while her husband rolls over onto her. The movie gives her and us a break when she opens her door and the young man on the other side starts delivering more than fabric. His name is Karim (Christopher Simpson), and it's true that the minute he flashes his first sidelong glance, I thought, "Give me a real break." But any young cute guy from the motherland who spends his days delivering clothes to women whose husbands are out is probably going to seduce one of the wives. Why not Nazneen? So, like her, I go with it.

We never see what her sister back in Bangladesh is up to, but we get an earful from the letters she writes. It seems she's madly in love with a light-skinned man. She writes of utter rapture, and Nazneen devours the pages accordingly. You also get the sense that this affair with Karim is powerful for her: The closest she can get to being her sister is to be like her, and now she has something to write home about.

This is all pleasant enough, like watching a paperback romance moored by characters with real-world problems. There's no real psychology to speak of. Whether Nazneen suffers from depression, the way her suicidal mother did, is unexplained. After an hour, those troubles intensify as Sept. 11 rears its head, and the movie tries to be more than a look at the awakening of an impassioned housewife. It flirts with making a bigger fuss out of the anti-Islamism English that the Muslims feel they're up against. But Gavron is more piqued by the romance of the situation than the headache and heartbreaks that arise from it. Dramatically the film is weaker for it, hilariously shorthanding Karim's growing extremism by suddenly giving him a kufi and scraggly beard while affording him no real ideological corollary. Future radical or fashion poseur? Hard to say.

Easily, the best character in the film is Nazneen's tubby husband, who's been angling to take the family back to Bangladesh. Instead of the boorish cuckold these stories usually require, he's a happy, if stubborn man whose jolliness masks the insecurity of inadequacy. His older daughter (Naeema Begum, who's good and spiky) thinks he's a fool. But the movie and Kaushik, in playing him so eloquently, infuse the character with sound judgment, surprising political clarity, and an achy heart. This completely re-characterizes the movie since "Brick Lane" is supposed to be the story of a woman who finds her voice. Even when she does, she doesn't use it to say anything.

Wesley Morris can be reached at wmorris@globe.com. For more on movies, go to boston.com/ae/movienation.

Written by: Laura Jones and Abi Morgan, adapted from the novel by Monica Ali