In 'Tuya's Marriage,' suitors are plenty 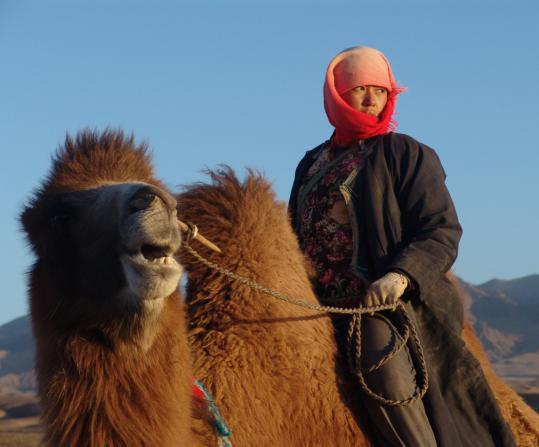 The life of Tuya (Yu Nan) changes drastically after her husband is crippled.
Email|Print|Single Page| Text size – + By Dennis Fisher Globe Correspondent / May 30, 2008

It's difficult to imagine a locale or set of characters further removed from American life than those of the Chinese film "Tuya's Marriage," a complex story of love and family relationships set among herdsmen in Inner Mongolia. But the emotional ground the story treads and the wrenching choices the characters face have a familiar feel.

At its core, the movie is a love story, the tale of Tuya (Yu Nan) and her husband Bater (Bater), who was crippled while trying to dig a well in the barren grasslands where the couple lives with their two children. With Bater unable to provide, Tuya shoulders the load for the family, trekking more than 9 miles each day to draw water from the well and move hay for the family's herd of sheep.

When Tuya injures her back trying to free her hapless neighbor Sen'ge (Sen'ge) from his overturned truck, Bater convinces Tuya that the couple should get a divorce so Tuya can find a man to support the family. Tuya agrees, but tells the long line of suitors that soon materializes that any man she marries must agree to support Bater as well. Sen'ge, whose own gold-digging wife is constantly disappearing with other men, makes the first play for Tuya, but she dismisses his grand plans as drunken foolishness. "You're not going to be rich, you're going nuts," she scolds him.

When a childhood friend who made it big in the oil business shows up, promising to provide a good life for Tuya and the kids, she accepts his proposal and watches as Bater moves into a nursing home. The arrangement soon falls apart, though, when Bater tries to kill himself and the family is thrown back together. And Sen'ge, with all of his foibles and flaws, gets his shot. (He also gets off the best line of the movie, when he tells Tuya, "Men make it and women spend it. That's the deal, right?")

The film has an ending that anyone who has watched a movie in the last 15 years will see coming half an hour into the film. But even with that, the weight of the performances from Yu Nan and Bater is enough to make for a satisfying, if uneven, film.

Written by: Wang and Wei Lu

In Chinese, with English subtitles