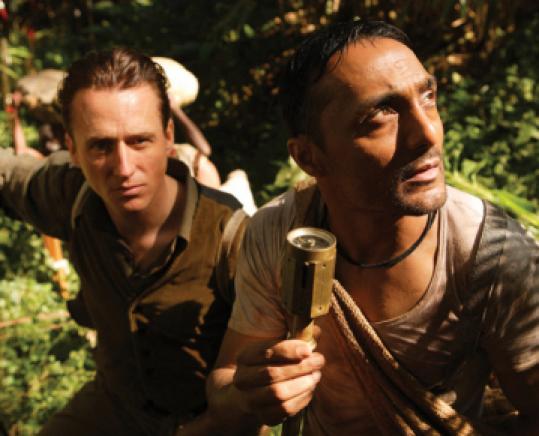 It's 1937, and British colonialist Henry Moores has a dream. He wants to build a road through the tea- and spice-growing highlands of India's southernmost state, Kerala. The road, chipped and hacked from the forested mountainside by hundreds of villagers, will open a trade route and make Henry a rich man.

Sporting his best khakis and flying the Union Jack from his outpost home, family man Henry seems like a nice guy. He treats his educated, English-dressing right-hand local man, T.K. Neelan (Rahul Bose), almost as an equal, inviting him for drinks, giving him a pistol as a gift, and spinning tales of how the project will benefit the town. Even T.K. begins to believe his claptrap. "With mutual cooperation comes mutual prosperity," T.K. tells his skeptical parents, who still live in relative squalor back in the village.

The competent, at times suspenseful "Before the Rains" orbits us along a trajectory of innocence corrupted, domesticity infested by politics, and local tradition messed with by a powerful Westerner. Unfortunately, that trajectory feels routine.

For it is that moment in history when Indians are beginning to think the Brits aren't all tea and digestive biscuits. Trouble is brewing, the villagers are getting uppity about their independence, and poor T.K. feels caught in the crossfire. Meanwhile, Henry (Linus Roache of "Law and Order" and "RFK") turns out to be not so nice after all. He's cheating on his stiff-upper-lipped wife, Laura (Jennifer Ehle), who's about to arrive with their young son for an extended visit. Henry and his mistress, house servant Sajani (Nandita Das), can't stop themselves from driving into the jungle to collect honey, bathe in the waterfalls, and make sweet, forbidden love.

Like a textbook lesson in conflict, by the end of the first reel, ample drama is set into motion - more than enough dramatic elements for a dozen movies. Investors worry Henry won't finish his road before monsoon season, before the rains hit. The pistol introduced in act one is primed to go off. Many a sari gets sticky and wet. "I've risked everything," cries Sajani, "My honor. My life."

When crisis strikes and Henry's snakelike nature is revealed, T.K. must make a difficult decision - naturally - between his quasi-colonial future and his village roots. (Interestingly, the skeleton plot of "Before the Rains" has been lifted from the Israeli film, "Red Roofs," also about village life meeting outsider train wreck.)

The scenery, shot by director-cinematographer Santosh Sivan ("Bride & Prejudice," "The Terrorist") is gorgeous to behold, if a bit too pristine. The broad-stroke viewfinder of Sivan's camera captures mist rising from tea plantations and angry villagers marching with torches. But it's hard to believe every peasant's sari, dhoti, and kurta could remain so spotless in this era of tribal agrarian life. There is nothing awful about "Before the Rains," except that this Brits-abroad caper is all too familiar.