Struggling with a tough hand in 'Deal' 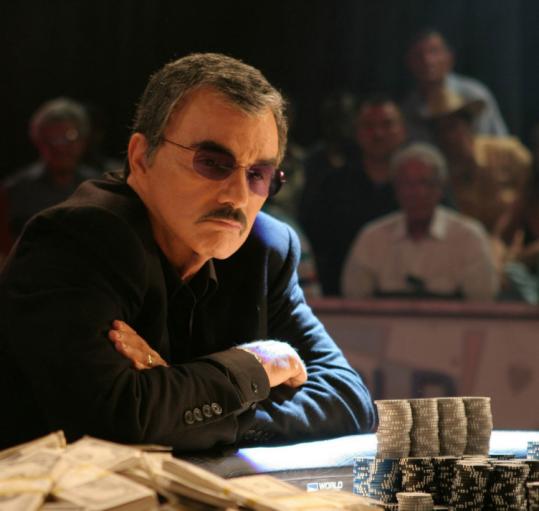 "Deal" is the latest card-tournament drama to suggest that the movies ought to find a more compelling sport, although it's more fun to watch the poker in this movie than the face of its star. Burt Reynolds's eyes, nose, and mouth are all where they were in his swaggering prime, but from certain distances, the surface beneath the features is seemingly too smooth to hold them in place. Depending on the lighting and the camera angle, he looks like a ghostly bust.

Reynolds's body distracts from the little bits of soul he's put into this performance. He plays Tommy Vinson, a poker veteran itching for a final drink from glory's chalice. Having sworn off the gambler's life, he pours his dreams into a tutorial relationship with a young up-and-comer named Alex (Bret Harrison), giving him strategic lessons, getting him drinks, and buying him a hooker, who's played by Shannon Elizabeth. She and Harrison aren't bad, but there's not a lot for either of them to do or say or feel.

Director Gil Cates Jr., who wrote "Deal" with Mark Weinstock, tries to generate emotional drama between Tommy and his patient wife (Maria Mason), Alex and his forbidding father (Gary Grubbs), and Tommy and Alex. But Cates's heart isn't in it. On its surface the movie owes something to Martin Scorsese's "The Color of Money," but Cates isn't a director with that sort of verve, and his characters aren't the sharks Scorsese was eager to swim with. Instead the movie might have drawn a grayer portrait of a has-been trying to coach a rising star, one not terribly dissimilar to John Huston's masterpiece boxing movie, "Fat City" (1972), where Stacy Keach tries to mentor some humility into Jeff Bridges.

But "Deal" doesn't really care about the characters as much as it does the World Poker Championships, where Tommy and Alex end up. Once we get there the movie becomes interesting because Cates understands the game and its dramas a lot better than he understands people and theirs.

Incidentally, Cates is the son of Gil Cates, the longtime producer of the Oscar telecast, and it's disappointing that he doesn't share his father's penchant for glitz. The photography looks dry enough for the scenes to cry out for moisturizer, the announcer play-by-play grates the nerves, and the cranked-up editing and tracking shots are too haphazard to add up to real style. It's TV-commercial stuff. "Deal" could use a touch of the slickness that's making the blackjack drama "21" such a greasy hit. Otherwise, it's like watching a not-very-special episode of NBC's "Poker After Dark."

Written by: Cates and Mark Weinstock