The kick of 'Kingdom' is in its stars 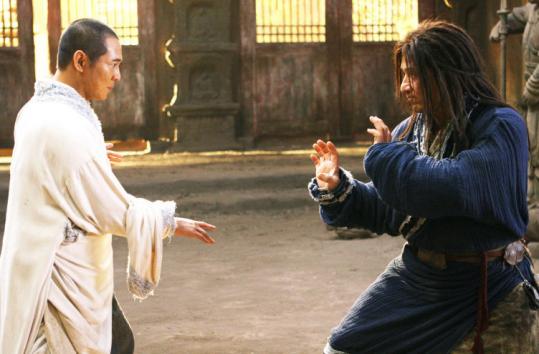 With a combined 133 movies and 72 years in the business between them, Hong Kong action superstars Jackie Chan and Jet Li have put off appearing in a film together for far too long. Even the idea of them sharing the screen gets your neck hairs pricking. Li's mercurial grace and Chan's comic daredevilry, the ways in which each man defies gravity in his own carefree fashion - it's like Fred Astaire and Gene Kelly having a smackdown.

What could be a breakthrough collaboration, though, ends up tasting like warmed-over fusion cuisine. "The Forbidden Kingdom" is a mild disappointment even as it clears a space for Chan and Li to bounce merrily off the edges of the screen. A US-Chinese co-production, the movie tries to retrofit the gaga airborne action of Asia's wuxia genre into a standard Hollywood "Karate Kid" storyline, adding a genetic graft of - get this - "The Wizard of Oz." Clearly, we're not in Hong Kong anymore.

The framing story casts Michael Angarano ("24") as Jason, a bullied kid in a South Boston that I can pretty much guarantee the Massachusetts Film Bureau had no part of. (It looks like, and is, a back lot at China's Hengdian Studios.) A devotee of classic martial arts flicks, Jason comes by a fighting staff that magically transports him to the ancient Middle Kingdom, where he's charged with returning it to the mischievous, hard-fighting Monkey King (Li).

Said king having been imprisoned in a statue by the evil Jade Warlord (Collin Chou), Jason joins up with a drunken fighting master, Lu Yan (Chan), and a traveling monk (Li again), both of whom teach him enough fighting skills to get through the movie alive. Along for the ride is a dart-tossing teenage love interest, Golden Sparrow (Liu Yifei).

She's pretty adorable, but the film's bad girl wipes her off the screen: Li Bingbing as a sexy, trash-talking, white-haired witch hired by the Jade Warlord to stop the good guys. With her tresses whipping out like surly tentacles, she's Asia's Next Top Medusa.

The direction is credited to Rob Minkoff ("Stuart Little"), and in the pokier, more obvious parts of "The Forbidden Kingdom," that's easy to believe. The movie's action director, though, is the redoubtable Yuen Wo Ping, of "Crouching Tiger, Hidden Dragon" and dozens of HK classics. It's his work that stops your breath: an elegant, concussive choreography that goes past common sense into pure rhythm and movement.

So the movie's not the classic it coulda-shoulda-woulda been - a friend's 12-year-old son came out of the screening drily remarking that "it wasn't as good as 'Hero,' " and he speaks the truth. Yet "Forbidden Kingdom" is unashamed about giving its audience a good time, and the high spirits go a long way toward counterbalancing the cliches.

And there's Chan and Li - the comedian who makes the real look impossible and the dancer who makes the impossible look real. Their opposing fighting styles mesh and separate here, cruising side by side in syncopation then diverging for frenzied, beautifully confident action solos. Who cares if the rest of "Kingdom" is a Top 40 retread? What these two do is the stuff of jazz.