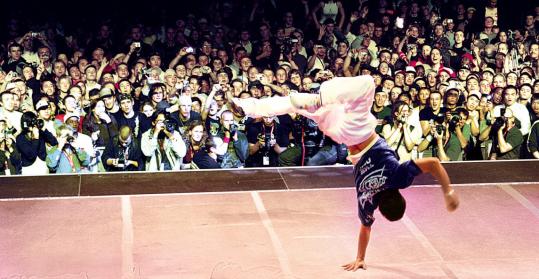 I'm not a huge fan of war. But if I have to watch a bunch of countries fighting, hands down, my preferred brand of combat is the hip-hop-dance battle. It's like one ferociously choreographed dance in an NFL end zone, only here both teams act like they just scored a touchdown. Everybody's cocky. Everybody's keyed up. Everybody takes turns doing moves you hardly ever see at wedding receptions. The battles in Benson Lee's documentary "Planet B-Boy" are exceptional. The movie's not bad, either.

After introducing us to the dance form's top crews - from Japan, the United States, South Korea, and France - it ships us off to Braunschweig, Germany, for 2005's Battle of the Year competition. (Davos has the World Economic Forum. Park City has Sundance. Braunschweig has this.) But the fun begins well before we get there. Lee has lucked into five charismatic groups of poor and working-class young men (and by my count, one woman) - they're families, really. And while some of the individual dancers have great stories, the coolest thing about the non-dance stuff in the movie involves the different crews' appreciative characterizations of each other's styles.

Their analyses extend to the world of diplomacy. The Japanese turn revisionism into innovation. The Americans (a Latino crew from Vegas called Knucklehead Zoo) generate star power from individualism. The French dance more beautifully and intricately than everybody else (it's true).

The South Koreans are fast learners. They have a double entry in Battle of the Year because the reigning champs - Gamblerz from Seoul - get a bye, meaning no pesky nationals for them. The other team, Last for One, is a start-up from Hicksville. But they're electrifying. (Hilariously, their concentration on individual skills wins them a comparison to superheroes. It's not entirely a compliment. A guy in Last for One can spin on his head with mutant speed, precision, and endurance. But a teammate concedes that that's about all he's got.)

Before Braunschweig, Lee plants the camera at street level and uses a vague fish-eye lens to take in the dancing the crews do in their respective locales. The Americans, for instance, rock their bodies among the rocks of the Grand Canyon. We sit in on rehearsals, hear a few of the dancers' personal histories, and behold some incredible gapped teeth. There is the impression that hip-hop dance can cure bigotry. The mother of Lil' Kev, the youngest, whitest member of the French crew, concedes that until her son started dancing with blacks and Arabs, she was a racist. Could b-boys bring world peace or financial stability next? Let's move Battle of the Year to Davos!

The Battle itself is presented more or less unto itself (19 teams, one winner, an audience of almost 10,000), complete with suspense and culminating in a pair of one-on-one confrontations with four of the crews. The most comic detour is the way the Gamblerz go for smokes and energy drinks after their first routine.

The film gets off to a defensive start, lacing a history of the b-boy (a dude who moves to beats) with arguments about b-boying's underappreciated place in hip-hop's history. It seems forever poised on the razor's edge between obsolescence and overexposure. Right now, the tide for b-boying seems relatively high, with the proliferation of celebrity choreographers (the names escape me, but I've seen the infomercials), the appearance of a few movies ("Step Up 2 the Streets" being the latest), a reality show (MTV's "America's Best Dance Crew") and the obligatory swooping in of Madonna, alterna-culture's shrewdest vulture, who doesn't appear to have released recent crazes like krump and parkour from her talons.

To her immense credit, she's got amazing taste in both dance forms and documentaries. Not much after Jennie Livingston's "Paris Is Burning" introduced us to New York's drag balls, Madonna was vogueing. After "Rize," David LaChappelle's touching high-voltage portrait of crews in South Central, Madonna had scooped up some of those dancers, put them in her videos, and taken them on her tour.

"Planet B-Boy" isn't as rich or strange or moving as either of those movies. It's often too earnestly explanatory. But it looks great and the dancing is the kind of stuff that would upstage the average pop star. Madonna, of course, is above average. So for me, the biggest suspense surrounding the movie isn't just which crew will win but whether Madonna will have the good sense to call it up after it does.

In English, Korean, French, and Japanese with subtitles