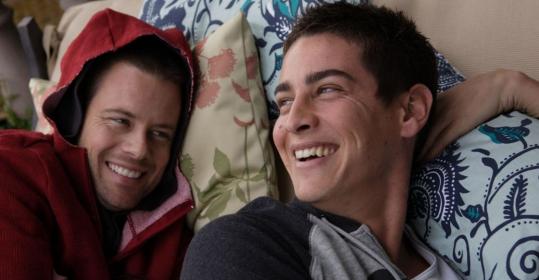 Brad Rowe (left) is Shaun and Trevor Wright is Zach in Jonah Markowitz's drama of two young men who have known each other since childhood and discover they are attracted to each other. (Regent Releasing)
Email|Print|Single Page| Text size – + By Wesley Morris Globe Staff / March 28, 2008

If Gus Van Sant ever made a Lifetime movie disguised as a video for a Jack Johnson song, it might go something like "Shelter," Jonah Markowitz's mellow but soapy drama about a surfer who falls for his best friend's older brother.

Zach (Trevor Wright), the surfer, and Shaun (Brad Rowe), the brother, have been in each other's lives since they were kids. Everybody knows Shaun is gay. Nobody knows Zach is. When he's not in the water or doing graffiti stencils, he struggles with his feelings - until he feels safe collapsing into a pool of domestic bliss.

The prospect of life with Shaun seems like a pretty sweet deal. He's well-off (all the romance happens at his family's beach mansion) and cute. (Rowe was once hailed as a budget Brad Pitt. We're in a recession. Maybe his time is now.) Zach is cute but not rich. But any social tensions exist solely within his family. His sister Jeanne (Tina Holmes) needs Zach to baby-sit her son, Cody (Jackson Wurth), and to take care of their ailing father while she mascaras the town.

But Jeanne definitely doesn't want him taking the kid to gay old Shaun's house. And forget about applying to art school. Who's gonna watch Cody? Holmes arrived late in the run of HBO's "Six Feet Under," and her purity amid the show's dysfunction and depravity seemed shocking. When she turns up in other small, grittier parts (she had coked-up sex with Damian Lewis in Lodge Kerrigan's "Keane"), it's still odd, like watching an angel in a flophouse. Here, she looks rough, but the actress's goodness shines through Jeanne's selfishness, bigotry, and defeatism.

Occasionally, Markowitz drops his one-dimensional sibling squabbles to show how good he can be with certain life-size details, like how a sidelong glance at a guy pulling on his wetsuit can turn into an incriminating stare. Zach and Shaun's maiden make out, as inevitable as it is, has a real tenderness that intermittently crops up later, too.

Markowitz has worked as an art director on movies, and his eye for material detail has an emotional corollary. If only he'd built a movie on short scenes of cuddling, staring, and surfing. Instead, "Shelter" is a gay movie like other American gay movies. Boy meets boy. Boy comes out. Boys fight opposition. Opposition caves. If there's life beyond the closet, too few movies know it exists.

Rated: R (language, some sexual content, and brief drug use; nothing you haven't seen in a PG-13 movie)