Training-film spoof takes a shot at the Iraq war 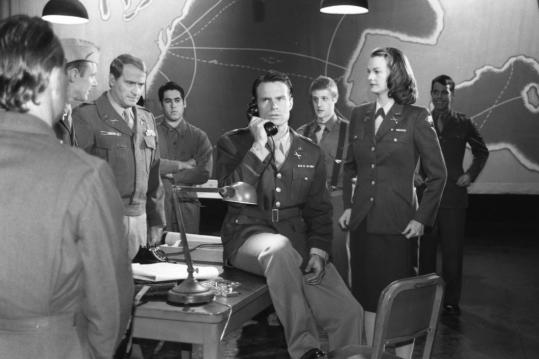 Lurching into town like the ghost of midnight movies past, "Military Intelligence and You!" is nothing if not cheeky. Writer-director Dale Kutzera has lovingly crafted an entire fake World War II training film with the intent of skewering attitudes surrounding the Iraq war, and the result is (or wants to be) a remixed "Reefer Madness" for our age of mass denial.

It's a great idea for 20 minutes. Unfortunately, the movie's 78 minutes long.

On the level of sheer technique, at least, "Military Intelligence and You!" is a bargain-bin achievement. Kutzera has dug up a real 1944 training film - the Oscar-nominated "Resisting Enemy Interrogation," featuring Hollywood stars (well, OK, sort-of stars like Kent Smith, Arthur Kennedy, and Lloyd Nolan) in a tale of downed US fliers trying to keep information from their German captors.

Scenes from this and other period epics have been smoothly integrated with newly shot B&W sequences set in a spare military HQ: A strapping intelligence analyst (Patrick Muldoon) tries to locate a hidden German airbase with the help of a rival officer (Mackenzie Astin) and the WAC they both adore (Elizabeth Bennett, playing perky and breathless). "That base is there," insists the analyst. "I'd stake the lives of other men on it."

Once you get over the goofy charm of seeing a young Ronald Reagan (in a clip from the 1943 propaganda short "Rear Gunner") appear to react to modern-day actors, "Military Intelligence" is forced to coast on snark, to rapidly decreasing returns. Granted, it's hard to resist lines like, "No one said this fight would be easy - except the president, the vice president, and the secretary of defense."

In fact, I could spend the rest of this review quoting the cheery, withering dialogue - most of it delivered by narrator Clive Van Owen in high Walter Winchell mode - and save you the trouble of seeing the movie. But I won't.

All right, but just a little:

"We're taking the fight to the enemy. Why? Because it's not enough to defeat them. We want to do it in front of their girlfriends and mothers."

"Rest assured, Americans don't treat their prisoners this way. Our torture chambers are always kept at a comfortable 72 degrees Fahrenheit."

"It's not our fault we're smarter and better than everyone else. It's just the way God made things."

And, my favorite: "Shopping's important. If we stop buying stuff, well, then, I guess they have won."

And so on, each sentiment ricocheting off our own inflated post-9/11 sense of national purpose. (Pearl Harbor is referred to as "12/7," and the terror alert has gone from Orange to Tangerine to Butterscotch.)

Yet "Military Intelligence and You!" lacks the mercilessness of real satire, and it never builds to a lethal head. The movie doesn't hurt. Instead, it's just another diversion in a time of many diversions.

Put it this way: If audiences mistake Kutzera's film for actual dissent, we're in worse shape than we thought.

Military Intelligence and You!

Written and directed by: Dale Kutzera