'City of Men' is a safer return to Rio 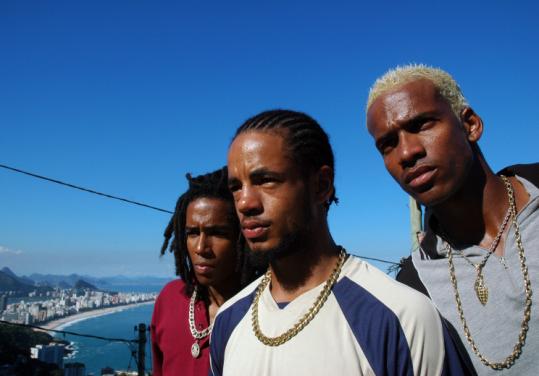 The makers of "City of Men" have described their new friendship drama as a companion piece to Fernando Meirelles's "City of God." That movie won international acclaim by rubbing our faces in all kinds of underage seediness and violent crime. It was authentic. It was also nauseatingly slick. "City of Men," which Meirelles produced and features a few of the actors from "City of God," doesn't stand a chance at that kind of worldwide popularity.

For one thing, the despicable sensationalism that won "God" such a huge audience is gone. So is the movie's panoramic vision of Rio's grisly, emotionally and economically impoverished underworld. Where "City of God" was ferocious, grandiose, and glamorous, this movie - directed by Paulo Morelli and written by Elena Soarez - is modest and intimate, acoustic where the other was desperate to electrify.

But watching best friends Ace (Douglas Silva) and Wallace (Darlan Cunha) wend their way through Rio's lawless streets, it's the wall-to-wall electricity of Meirelles's moviemaking, unclean as it was, that you miss. Maybe heartfelt discretion isn't the way to go, either.

"City of Men" dredges up a new tale of gangstas and their turf war in the Dead-End Hill favela. But we've been through the mood changes and backstabbing before - in Brazil and beyond it. So what the movie centers on is the bond between Ace and Wallace, who are on the edge of 18. They've been buddies since they were boys, and the movie has the footage to prove it. Silva and Cunha were urchins in "City of God." Now Ace, with his baby face and shiny mahogany skin, is a daddy. And Wallace, with his serious eyes and big smile, is searching for his jailbird father.

Morelli and Soarez don't have the smoothest time lacing the escalating gang war with the escalating melodrama between Ace and Wallace. When those two end up on opposite sides of this mess, all you can do is wait for the storm to blow over and hope the body count isn't too staggering (it's not). The movie has a dramatic thinness, breezy tone, and unconvincing happy-ish ending that make it feel more inconsequential than anything about killers and imperiled children probably should. But no one ever really looks all that worried in the first place. The most harrowing scene in "City of Men" involves a woman having her dreadlocks cruelly shorn.

One exception to the lightness is Rodrigo Dos Santos, who plays Wallace's father, and he is as elegant as some of the camerawork and editing. There's real sadness in his face and voice. The movie is mongering hope. But he comes close to embodying what happens when hope's not enough.

In Portuguese, with subtitles

Rated: R (violent content, language, some sexuality, and a child momentarily abandoned on a beach)