'Chicago': A look at Summer of Love's reckoning 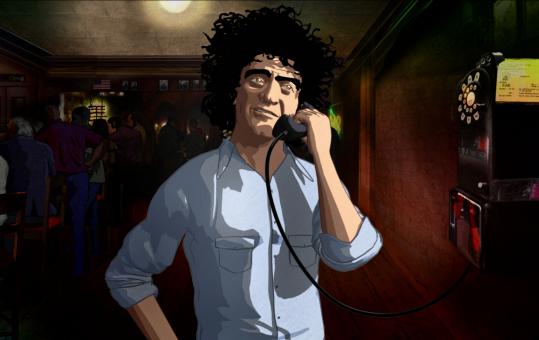 Brett Morgen's absurdly engaging docudrama "Chicago 10" has a specific mission: to jolt inert young audiences of the early 21st century into fresh outrage and activism. If the movie has to be entertaining to do the trick, OK. The result is Grade-A agitpop, a mixture of archival footage and cheeky, creative animated reconstruction that's funny and frightening in equal measure. Forget the R rating; if your kids want to know what the '60s were about, here's a start. You might welcome the refresher course, too.

In August 1968, antiwar protesters and disaffected college kids descended on Chicago for the Democratic National Convention, intent on creating a "guerrilla theater" that would bring their message to middle America via the news media. Chicago Mayor Richard J. Daley sent in the riot squad; four days of pitched street battles followed and middle America, thoroughly freaked, eventually swung to the right and Richard Nixon.

Eight months later, Nixon's new attorney general, John Mitchell, put the activists he considered responsible on trial in a Chicago federal courtroom, charging them with conspiracy and crossing state lines with intent to incite riot. They were called the Chicago 8, then the Chicago 7 after Bobby Seale's case was separated from the others; Morgen tosses in defense attorneys William Kunstler and Leonard Weinglass (eventually convicted of contempt along with their clients) for an even 10.

It was a show trial, all right, but not the show the government expected. The defendants represented various distinct factions of the radical left: David Dellinger of MOBE (the National Mobilization Committee to End the War in Vietnam) was a follower of Gandhi's nonviolent tactics, while Tom Hayden and Rennie Davis came from the much more confrontational Students for a Democratic Society. Seale was a Black Panther; John Froines and Lee Weiner were tangential figures charged with creating incendiary devices (stink bombs, to be exact).

Then there were the Yippies, represented by Abbie Hoffman and Jerry Rubin - counterculture pranksters who turned every waking moment into anarchist improv. "We believe politics is how you live your life, not who you support," said Hoffman in one of his more sober moments. He was a pop star in search of a stage; the trial proved to be it.

Morgen tackles this broad, busy subject in two distinct styles. He painstakingly stitches together historical footage of the lead-up to the convention and the riots themselves, documenting the day-by-day escalation into chaos without resorting to narration or talking heads. Because no cameras were allowed at the trial itself, "Chicago 10" takes the novel approach of animating the court transcripts, using voice actors and the slapdash, semi-photorealistic cartoon style of movies like "Waking Life" and "A Scanner Darkly."

These two interwoven strands, straight documentary and dramatic re-creation, build momentum together, creating a sense of a society spinning out of control. If the riots were a tragedy, the trial was pure paranoid farce that brought out the extremist in everyone. Hoffman (voiced by Hank Azaria) and Rubin (Mark Ruffalo) show up at court wearing jurists' robes and blow kisses that the jury is instructed to ignore. Poet Allen Ginsberg (Azaria again) chants "Om" from the witness stand. The collision between straight America and the counterculture has never seemed more surreal.

That conflict is ultimately personified in the showdown between Seale (Jeffrey Wright) and Judge Julius Hoffman, whose needling, querulous voice is provided by the late Roy Scheider. Seale wanted to represent himself, Hoffman refused, Seale made an angry stand for his constitutional rights - and Hoffman had the defendant literally tied to a chair, silenced with a gag, and knocked around by bailiffs.

It was at that precise moment the government lost its case, and "Chicago 10" gives us the stark visual correlative: a black man bound to a chair in an American courtroom, beaten for trying to speak his piece. Even Abbie had stopped laughing by then. You may have briefly stopped breathing.

The movie's not particularly interested in playing fair or providing a larger cultural context - its single biggest flaw - and the soundtrack choices (Eminem, Rage Against the Machine) are jarringly anachronistic, if not pandering. Morgen ("The Kid Stays in the Picture") does hold his defendants up to the light of history and gauges them differently, though. The Yippies get their laughs and provocations but on some level they're glory hounds, throwing bottles against the mainstream for the sheer thrill of it.

Dellinger, by contrast, is presented as a rock of pacifist sanity and Kunstler (Liev Schreiber) and Weinglass (providing his own voice) as attorneys of conscience. They're seen as heroes not because of what they did but where they drew the line, saying: If you cross here, you're no longer fighting for freedom but against it.

"Chicago 10" implicitly prompts a viewer to wonder where his or her own line is. Better yet, it makes you question what, if anything, you're doing about it. The movie dazzles us into self-examination.

Written and directed by: Brett Morgen