'Boleyn Girl' is a royal pity 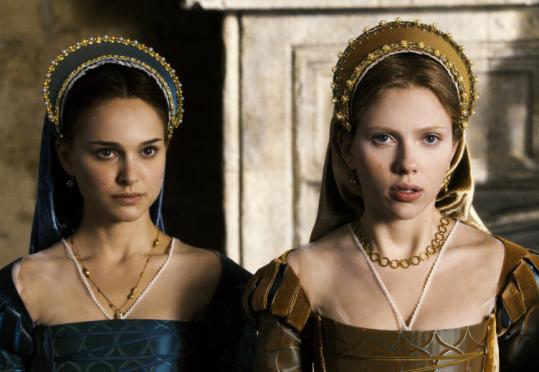 "The Other Boleyn Girl" is the kind of potted historical drama that's not good enough to take seriously and, sadly, not bad enough to be any fun. It's handsome, heavy-breathing, and silly - British royal history with the DNA of a "Gossip Girl" episode.

The film's also the latest in the Tudor-chic cottage industry: all those Elizabeths on film and TV, "The Tudors" ripsnorting away on Showtime, and, of course, Philippa Gregory's popular novels, of which 2002's "The Other Boleyn Girl" was the first. (She has since written five more, cranking them out like "authentic" period sausage.)

The attractions, as ever, are the outsized palace personalities, here a young, rapscallious Henry VIII (Eric Bana, miscast) torn between two warring Boleyn sisters, mouseburger Mary (Scarlett Johansson) and man-eater Anne (Natalie Portman). Both are his mistresses but only one is holding out for a crown. What's a king to do? Apparently everything but run the country.

Directed by Justin Chadwick, with a screenplay adapted by Peter Morgan ("The Queen") on one of his lesser days, "The Other Boleyn Girl" shows Henry initially lusting for the older Anne, then falling for the warmer, younger Mary, then switching course one or two more times. And you thought you and your siblings had issues.

Whoever the king wants is fine by the girls' hapless father, Sir Thomas Boleyn (Mark Rylance), and their uncle, the scheming Duke of Norfolk (David Morrissey). A Boleyn mistress, they figure, may result in a Boleyn heir on the throne, since Henry's Number 1 Queen, Catherine of Aragon (Ana Torrent, once the child star of 1976's "Cria"), has hit menopause with only Bloody Mary to show for it.

There's the germ of a serious idea here: the ruthlessness with which women throughout history have been used by ambitious men as tools for advancement, and their helplessness to do anything about it. Sir Thomas is quite happy to pimp his daughters to Henry, even the married Mary (her spineless husband is played by Benedict Cumberbatch, the perv in "Atonement"). The girls' mother (Kristin Scott Thomas) can only snarl impotently.

"The Other Boleyn Girl," though, is a soap opera set at Hampton Court, with an Australian and two Americans playacting British nobility. That might work if there were some subversive snap to the filmmaking, but Morgan's dialogue wheezes ("I find you much changed, Mistress Anne" - stuff like that), and Chadwick directs with dogged faithfulness to cliché. Whenever the movie switches to a new location, we get a shot of someone riding! riding! across the downs. I kept waiting for one of the Monty Python boys to step out from behind a shrub and clop a pair of coconut shells together.

Johansson mostly furrows her brow as the docile, dumber Boleyn girl, and Bana invites hoots as a sensitive New Age Henry. Portman gets to break out the Big Acting, though, and she's good company as she stamps her foot and careens from saucy to penitent to vengeful to callous to desperate. That's already five more emotions than Queen Amidala got to show, and she kept her head.

You know the story. Anne nags Henry into starting the English Reformation already so he can get a divorce and make her Queen Number 2; she presents him with a daughter (who will grow up to be Cate Blanchett) before falling afoul of court intrigues and rumor, the worst presented here as near-fact in the movie's most chowderheaded subplot.

The rest is hokum: The historical Mary Boleyn was probably much older than her sister, not the other way around, and their liaisons with the king took place years apart (it's also highly doubtful Mary's son was Henry's). I know, the genre's called historical fiction, but a movie this insipid isn't worth running to the Internet to figure out what actually happened. "The Other Boleyn Girl" aspires to royal-purple drama but it's a waterlogged paperback romance at best.

The Other Boleyn Girl