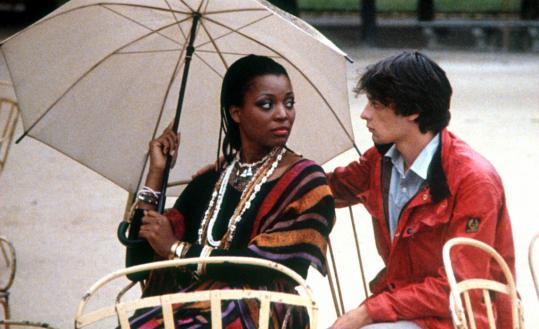 "Diva" (with Wilhelmenia Wiggins Fernandez and Frederic Andrei) epitomized chic in the early '80s, but it is the music that has lasted.
Email|Print| Text size – + By Ty Burr Globe Staff / February 22, 2008

What does a movie that was utterly of its moment look like when its moment has passed? In the case of "Diva," both not so hot and better than it should. Receiving a one-week 25th anniversary release at the Kendall starting today - with a fresh 35mm print, which matters with a pop-art bonbon like this - the movie that seemed delightfully fizzy on its 1982 US release now feels like threadbare gossamer. If you go in expecting nothing but style, though, you'll be all right. It's period style now, and the period is high early-'80s.

The feature debut of Jean-Jacques Beineix, who'd go on to "The Moon in the Gutter" and "Betty Blue," "Diva" seemed to encapsulate the scrappy chic of post-punk/post-modern Euroculture: It deconstructed genre cliches just for the hell of it, then recombined them into something shiny, shallow, and new.

Ironically (is that redundant?) the key piece of music in "Diva" is a gorgeous 19th-century aria: "Ebben? Ne andrò lontana," from "La Wally," sung in the film by an American soprano named Cynthia Hawkins (played by the American soprano Wilhelmenia Wiggins Fernandez). Her concert is taped by an obsessive fan - a shy, gangly Paris postman named Jules (Frederic Andrei) - and since the singer has steadfastly refused to record her voice on artistic principle, the tape becomes a sought-after object.

There's another tape - of course there is - containing a prostitute's confession implicating a criminal bigwig. In short order, Jules is being chased by a pair of Taiwanese opera-label heavies, a policewoman (Chantal Deruaz), and two menacing thugs (Gerard Darmon and Dominique Pinon).

One of the chief delights of "Diva" back in 1982 was the character of Gorodish (Richard Bohringer), a blasé Zen master who suggests Jean-Paul Sartre crossed with Superman and who turns up whenever the plot and Jules need him to. He's still a charmer, and so is his girlfriend/familiar, Alba, played by the teenage French-Vietnamese actress Thuy An Luu, but it's clearer than ever that Beineix doesn't know what to do with these two other than peek up Thuy's skirt. As with so many pop moments a quarter-century on, what once looked sexy now smells a little sexist.

The problem with a movie that's all style is that style becomes passe, and you're left with precisely nothing. "Diva" was praised as an opening salvo in a new French New Wave that ultimately went nowhere, for a reason. The first New Wave directors - Jean-Luc Godard, François Truffaut, and company - invested their own early-'60s genre remixes with aching, heartfelt emotion. "Diva" launched a thousand graphic designers and music-video directors and not much more. It started a look but not a movement, and so it's a souvenir of its times rather than an influence on them. Pinon's skinhead thug, with his wraparound shades and earphone, was once a genuinely creepy figure. Today he looks like a video store clerk.

What has aged well in "Diva" is the grave beauty of that aria and the wry, painterly camera shots - you should see the new print for the colors alone - conceived by Beineix but executed by the great French cinematographer Philippe Rousselot. They're enough to tide us over and maybe convince the kids that hip date movies existed back when their parents and dinosaurs roamed the earth.

Written by: Beineix and Jean Van Hamme, based on a novel by Delacorta