There's something 'Nottie' about Paris 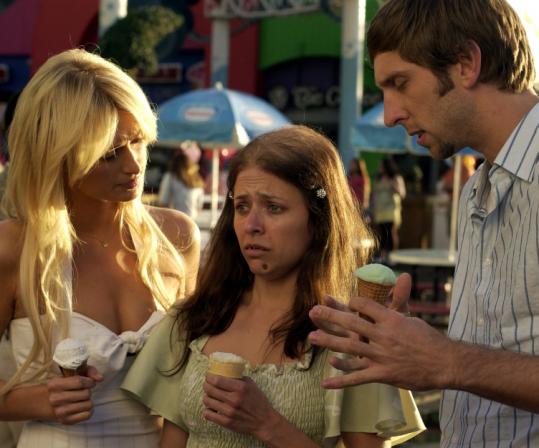 The problem with "The Hottie and the Nottie" is - wait, let me start again. The most crippling of the many problems afflicting "The Hottie and the Nottie" is the radical disconnect between the title and our perception of the movie's star. I'm not sure on what planet Paris Hilton is considered "hot" - one that involves hazmat suits and tongs, possibly - but it hasn't been Earth for some time.

This may not be fair. For all I know, Hilton is in reality a demure young thing who spends her spare time contemplating String Theory while knitting fingerwarmers for the lepers of Molokai. Her indelible public persona, however, is that of a - what's the word? Oh, yes: skank. A rich, brainless, clueless skank.

Well, we need our entitled fools. Always have. From Marie Antoinette to the brats on MTV's "My Super Sweet 16," they serve a social function by reassuring the plebes that money can't buy intelligence or class. Or, in this case, acting ability. "The Hottie and the Nottie" - the title makes it sound like a picture book for remedial readers - is a limp low-budget romantic comedy that more or less remakes "There's Something About Mary" with Hilton in the Cameron Diaz role. Suddenly Diaz is looking like Dame Judi Dench in comparison.

Joel David Moore, a likable beanpole usually relegated to nerd character parts, plays the hero, Nate Cooper, who has never gotten over his grade-school crush on little Cristabel Abbott and decides on a whim to drive cross-country and woo her full-time. Cristabel is grown up now and played by Hilton (who also executive produced), and the nonsensical gag is that she's so beauteous men line up on her Santa Monica jogging route with "Marry Me" signs.

Cristabel is still best friends with June Phigg (Christine Lakin), a.k.a. "the Nottie." Hairy, clumsy, plagued with sores and green teeth, June's the first line of defense against anyone hoping to score with Cristabel. Nate plots to clean her up and set her up, only to wonder if he's falling for the newly refurbished June himself.

As written by TV scribe Heidi Ferrer and directed by Tom Putnam on a budget lower than Hilton's per diem, "The Hottie and the Nottie" is more harmless than hateful. You've seen dozens of movies like this on cable in the wee hours, and most of them were made during the Reagan administration. The tone wobbles between gross-out comedy (June's diseased toenail flies off into someone's mouth) and overwritten rom-com earnestness. The lighting is dimmer than the characters.

Since Moore and Lakin are professionals, they're able to give Nate and June's sub-screwball dialogue a bit of snap even when the momentum slows to a crawl. As Nate's fat-slob best friend, The Greg Wilson (that's how he's billed) is supposed to be crassly charming and manages the first half of the equation.

Then there's Hilton. She delivers her lines in an unmodulated near-whisper and keeps her head lowered, gazing up at Nate as if she'd learned Acting Position #1 and then dropped the class. The film poses her in a succession of bikinis, mini-tops, and short shorts, none of which give her the presence necessary to actually hold the screen. Her head seems too small for her body and stuck on at an odd angle. She resembles nothing so much as a tiny blond velociraptor.

That's cruel, I know, but one's mind wanders when a movie's evaporating up there on the screen. More crucially, there's not a whit of mystery to Hilton, as there must be for any proper movie star. How can there be mystery when she's everywhere in our culture, from reality shows to Internet sex videos to tabloid websites to perfumes and other personal brand extensions? With all her wealth and meaningless celebritude, Hilton is incapable of doing the one thing most of us desperately wish she would do: Go away.

The Hottie and the Nottie