'Taxi to the Dark Side' is terrifying ride behind US lines 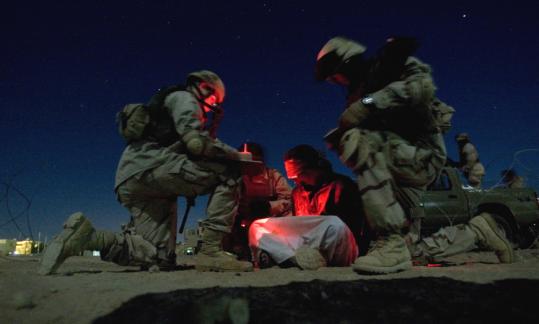 Initially, it seems that Alex Gibney's military-torture documentary, "Taxi to the Dark Side," will be a work of speculation and spotty recall. But the film quickly becomes one of the most powerful, carefully researched investigations of the moral-legal side effects of current American military campaigns in Afghanistan and Iraq. It's terrifying in a way that sneaks up on you.

The soldiers Gibney interviews in the early minutes don't appear to know what happened to Dilawar, an Afghan cab driver who died in a prison at Bagram Air Base in 2002 on their watch. The first we hear of "blunt-force trauma" to Dilawar's legs comes from a coroner's report.

A soldier does mention that he'd become inured to the prisoners' humanity. They were, after all, so-called enemy combatants. Another asserts that Dilawar had been a triggerman for a rocket attack. Someone else mentions that the Army had trained its men to break detainees. Then, while the shadows spread across these men's faces as they sit in front of Gibney's camera, the factual fog vanishes with one detail, then another. They actually remember a lot.

One soldier says he recognized Dilawar only as a body chained up with a bag on its head, and another, an eerie bald guy named Damien Corsetti, begins the film's enumeration of the ways soldiers and MPs were ordered to mistreat their suspected combatants. A few of the Army men we've met at this point were charged - though not convicted - for their behavior at Bagram. (The movie doesn't go into it, but Corsetti was memorable in reports of the trial for his nickname, "Monster," which prisoners remember tattooed on him in Italian.)

Gibney, whose previous movie was 2005's ": The Smartest Guys in the Room," does explore the soldiers' culpability for, among other things, Dilawar's death. Indeed, "Taxi to the Dark Side" shrewdly starts with the prisons and glimpses into Dilawar's life. As a few of these men argue, though, their behavior was bad, but they've been singled out for doing their bosses' bidding. So the movie's dismay rises and expands to the top of the chain of command - from the floors of Bagram and, crucially, Abu Ghraib and the detention camp in Guantanamo Bay, up to the Pentagon, which allegedly sanctioned the cruel and unusual means of interrogation.

This film travels the legal-moral avenues of modern interrogation, many of which appear to have been customized by the Bush administration. Donald Rumsfeld figures just as spookily here as he does in Charles Ferguson's equally unnerving road-to-Iraq critique, "No End in Sight," which is up against Gibney's movie for this year's feature documentary Oscar.

Then there's John Yoo, the Justice Department lawyer who helped argue, on behalf of the Bush administration, for both legalizing torture and denying alleged enemy combatants Geneva Convention protection. Rather matter-of-factly, Yoo, who teaches at Berkeley now, shows up to provide justifications for his memos.

Cabalistic government doings always freak me out, since they're happening under our noses. "Taxi" adds an element of science-nonfiction, zeroing in on the CIA's enthusiasm for the neuropsychologist Donald O. Hebb's research on sensory deprivation.

"Taxi" raises two questions. One of them is the value of human rights, which John McCain brings up during a Senate hearing we're shown. To put a perfectly fine point on things, the film shows emotional footage from McCain's own POW days. The other question is how effective torture - however it's defined - even is. The film takes too long to get around to grappling with explanations. Until they arrive, there's a major hole in the film.

Still, "Taxi to the Dark Side" benefits from absolute timeliness - or maybe timelessness at this point. Just this week, the CIA restated the Bush administration's certainty that water-boarding isn't torture, admitting to having used it as an interrogation tactic several times, which in turn made Democratic senators apoplectic.

The movie that's materialized from Gibney's use of all types of footage and conversations with military personnel, journalists, field agents, and former prisoners covers identical ground as several books, some very good news stories, and a few editorials. But so much of the film's extraordinary potency is visual. We see footage of one hooded prisoner bullied into public masturbation and of another banging his head into a wall until it bleeds. Some of the other images we're offered - from Abu Ghraib, say - are also notoriously familiar. But they've lost none of their power to pimple the skin. The victims have been dehumanized. But their abusers have been, too. Photos highlight the evil glow in the soldiers' faces, the way an X-ray shows breaks in bones.

The Abu Ghraib photos are Stanley Kubrick stuff: people at their ugliest. And this movie arrives as the popularity of the horror-film genre dubbed "torture porn" - "Hostel" parts I and II, "Saw" parts I through IV," for example - has begun to ebb. We're meant to get off along with the filmmakers on the images of unsolicited evisceration and terror in those movies. Watching sustained pictures and video footage of the real thing in "Taxi to the Dark Side" leaves you nauseated and spooked in a way few horror movies, for want of skill or moral sense, could. Blunt-force trauma isn't only an explanation on a coroner's report. Here it's the toll this movie's information takes on us.

Taxi to the Dark Side

Writer and directed by: Alex Gibney