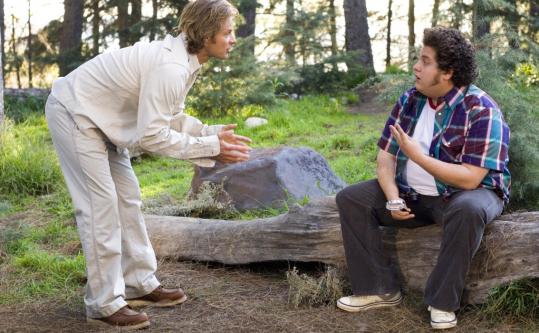 Steve Zahn had a good 2007 - he came this close to an Oscar nomination for "Rescue Dawn" - but the new year finds him working as a second-tier Owen Wilson. His character, Pete, the son of a late, beloved wildlife-show host, is running dad's program into cancellation with the mismanagement of soundman-partner Fred (Allen Covert) and crew members Cooker (Jonah Hill) and Danny (Peter Dante).

The problem is that they don't know the first thing about animals and they're too stoned to find out. A tip to the whereabouts of Bigfoot sends them to Ecuador (played by what appears to be locations in greater LA) along with a perky travel agent (Ashley Scott), a burned-out cameraman (Justin Long), and an alcoholic animal handler (Kevin Heffernan).

The movie's an almost painless frat boys' night out, and the target audience will recognize the cast from other, better dude-comedies. Covert had a college hit with "Grandma's Boy" a few years back, but that was a lot less desperate than this one, if just as sloppy. Hill, riding high with "Knocked Up" and "Superbad," talks in a strange hillbilly accent and sticks a joy-buzzer into the other characters' crotches whenever he can.

The appearance of Harry Hamlin as a rival host tugs "Strange Wilderness" in the direction of a real movie. The appearance of Ernest Borgnine as an old-time TV cameraman, giving Pete a pep talk while the latter sucks down a righteous bowl, puts it firmly back into the surreal.

I laughed a few times, mostly at Pete's buzzed nature-show voice-overs: "Bears derive their name from a football team in Chicago," and so forth. Every time "Strange Wilderness" starts working up a genial vibe, though, it gets brought down by the ramshackle complacency of the script by Peter Gaulke and director Fred Wolf. They've named the main characters after themselves - whoa, meta - and when they get bored after 87-odd minutes the movie just nods out.

The probable high point (nudge, wink) is the bit where an enraged wild turkey becomes fastened on Zahn deep-throat style and the others have to beat it off. (Nudge. Wink.) Let that serve as recommendation for devotees of gross-out yuks and a warning to everyone else. Me, I'm holding out for Harold and Kumar.

Written by: Wolf and Peter Gaulke