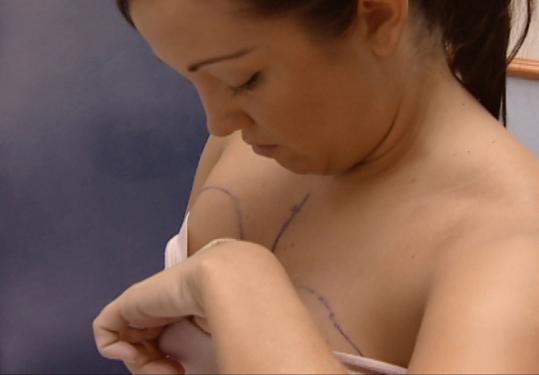 Back in 1974, Audrey Ciancutti was diagnosed with breast tumors. She took the path that many women at the time followed, getting a double mastectomy, then silicone breast implants as part of reconstructive surgery.

Within a year, though, the implants ruptured. New ones were inserted, and they ruptured, too. Ciancutti soon had unexplainable rashes, joint pain, chronic fatigue, and arthritis, and she wondered: Could the silicone be poisoning her body?

Her daughter, Carol Ciancutti-Leyva, wondered the same thing. Years later, Ciancutti-Levya became a filmmaker, and since 1999 she's worked to document the debate over breast implant safety - what doctors say, what implant manufacturers say, what lawyers and government officials and health activists all say. She's also looked at how women who are considering implants after surgery or as a cosmetic procedure weigh the information and make their decisions.

The culmination of her investigation is a 58-minute work called "Absolutely Safe." The movie's website says that its story "always returns to the women and girls who stand front and center both willingly and unwillingly in the traffic jam of beauty, media, risk, and 'choice.' "

The director will be at the Museum of Fine Arts today at 2:15 p.m. and Thursday at 4:15 p.m. to present the project. With her for a discussion after both screenings will be Judy Norsigian, executive director of the nonprofit group Our Bodies Ourselves, also known as the Boston Women's Health Book Collective. Since 1970, the group has published materials about women's health including the influential "Our Bodies, Ourselves," now in its fourth edition.

Citing statistics from the American Society for Aesthetic Plastic Surgery, OBOS reports on its website that in 2005, more than 360,000 women and teenagers had breast implant surgery for augmentation and some 57,000 women underwent breast implant surgery for reconstruction after mastectomy. The number of breast augmentations has more than quadrupled since 1997, with many of the surgeries performed to replace old implants, according to the group

In a director's statement, Ciancutti-Leyva says that "By the time I started this film, I believed that my mother's illness was caused by her silicone breast implants." She says she didn't set out to prove implants were harmful, but rather to explore the questions that surround the procedure.

She was particularly interested in looking at all the reasons women choose implants to boost their self-confidence. "The messages are bountiful in today's media that we must all 'look good,' women and men alike," she writes. Breast implants are now marketed "with different styles to choose from, as though we are buying a dress."

More about the film is online at absolutelysafe.com. Information about the shows is available from the MFA at 617-267-9300 and mfa.org/film.

PENN AND ASSAYAS AT ARCHIVE: The Harvard Film Archive will host two directors and their movies this week. On Monday at 7 p.m., French director Olivier Assayas will discuss his work at a screening of his new "Boarding Gate," a drug-run thriller staring Asia Argento, Michael Madsen, and Carl Ng.

In conjunction with Assayas's visit, the HFA is showing three of his other films today: "Les Destinées sentimentales," a period piece set in the early 1900s staring Isabelle Huppert, at 3 p.m.; "Paris Awakens (Paris s'éveille)," a family drama, at 7 p.m.; and "HHH - A Portrait of Hou Hsiao-hsien," an affectionate documentary about the Taiwanese director, at 9 p.m.

Next weekend, acclaimed American director Arthur Penn will be at the archive on both Friday and Saturday to answer questions from the audience. (See interview, Page N9)

On Friday, Penn will attend a double-feature of "The Chase," a 1966 piece with Marlon Brando, Jane Fonda, and Robert Redford, and "The Tears of My Sister," a live television drama made in 1953, at 7 p.m. On Saturday, he'll be at a double feature of "Night Moves," a noir starring Gene Hackman, and "Mickey One," with Warren Beatty as a stand-up comedian on the lam.

Further information about the archive's programs is available at 617-495-4700 and hcl.harvard.edu/hfa.

SCREENINGS OF NOTE: The Edinburgh Film Festival's Mirrorball collection of music videos makes its annual pilgrimage to the Museum of Fine Arts starting Wednesday and running through Feb. 23. Included in this year's line-up of what the Edinburgh fest terms "ground-breaking, shape-changing" videos, virals, and promos are mini-movies for Grizzly Bear, Feist, Placebo, Radiohead, and the White Stripes.

German director Dietmar Post will be at the MFA on Saturday with two of his documentaries: "Reverend Billy and the Church of Stop Shopping" at 6 p.m., and "Monks: Transatlantic Feedback" at 7:30 p.m. His visit is copresented by the Goethe-Institut Boston.

Also on Saturday, Hampshire College alumnus Brett Morgen ("The Kid Stays in the Picture") will be at the Academy of Music in Northampton for the New England premiere of "Chicago 10," his new movie about the radicals who disrupted the 1968 Democratic National Convention with antiwar protests. There's a reception at 6 p.m. with the screening and Q&A at 7 p.m. (413-584-9032 and acad emyofmusictheatre.com).

Leslie Brokaw can be reached at lbrokaw@globe.com.