A touching portrait of an 'average' American teenager 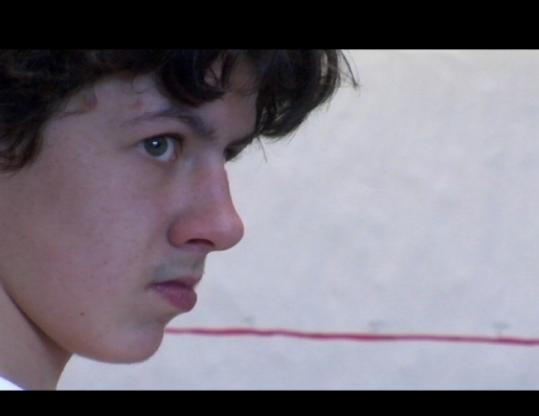 Billy Price, 15, who lives in Brunswick, Maine, is chatty, awkward, and eager to win over a girl from his school. (courtesy of eight films/isotope films)
Email|Print| Text size – + By Ty Burr Globe Staff / January 25, 2008

The idea sounds criminally easy: Pick a random teenager, follow him around with a camera for a few weeks, and, presto, you have an instant essay on coming of age in America.

Well, maybe. It depends on the teenager and, to a lesser degree, on the filmmaker. For her debut movie, casting scout-turned-documentarian Jennifer Venditti was lucky to stumble across 15-year-old Billy Price of Brunswick, Maine, when she was working on a friend's short. The result is called "Billy the Kid," and it's genuinely haunting - a portrait of a boy who'd give anything to be average.

Billy himself gives us the skinny on his life so far in the film's opening moments. He's a sophomore, a karate purple belt, 5 feet 7 inches, 104 pounds. He likes AC/DC and Kiss and is allergic to penicillin. "I have a big interest in girls," he says, "but I'm not a jerk about it." He's articulate, nervous, adorable, so why does this kid sit alone every day in the school cafeteria?

Because, as some kids are, he's a bit much for the small town around him. He's too talky, surrendering TMI about what goes on in his head in a bid for instant connection. To paraphrase Jim Morrison, Billy wants the world, and he wants it now. Relax and go slower, advises his circumspect mother, Penny - but who listens to their parents when they're 15?

Much of the film's action (such as it is) concerns Billy's wooing of Heather, a shy fellow student who waitresses at a diner on Main Street. Venditti's camera tags along as he works up the nerve to talk to her, to ask her to take a walk, to eventually ask if she'd be his girlfriend; the suspense is agonizing because many of us have been right there, saying (or trying to say) these exact same things.

At one point Billy excuses himself to go to the diner men's room, but he's still wearing a clip-on microphone. The camera stays on the closed door and eavesdrops as he repeats in mortification the last lame comment he made to Heather, then mutters ". . . death . . . death . . ." It's the sound of a young man staring into the abyss and wondering if he has the nerve to jump in.

As "Billy the Kid" unfolds, a darker aspect emerges, and Venditti isn't wholly equipped to handle it. There are joys in Billy's relationship with Heather and there are disappointments; his reaction to the latter is a little scary and probably more normal than we'd like to think. What are we to make, though, of the news that he's been taking books about serial killers out of the school library? An acceptably ghoulish adolescent fascination with the taboo? Or the sign of a deeper dysfunction?

The director could ask; she doesn't. Nor does she include the news that Billy tested positive for Asperger's syndrome after filming was completed, which at least gives his social awkwardness a known pathology (other than simply being a teenager). His relationship with his mother seems too rooted and loving for him to spin out completely, but we hear sordid tales of a drug-abusing biological father, and Billy's lavish praise of his stepdad, a local DJ, is qualified by the older man's refusal to appear in the film.

Venditti leaves so much out that what stays in becomes suspect. How do you capture a person's life in an eight-day shoot, anyway? Are any of the scenes staged, as the occasional multiple camera angles suggest? How much is the director exploiting her subject, and how much is he willing to be exploited? A more experienced filmmaker might not answer these questions but she'd at least confront them.

On the other hand, "Billy the Kid" refreshingly reminds us what a big, fat lie most depictions of teenagers are in American movies and TV. Billy can't be assigned a type. He's not a nerd, or a jock, or an alterna-kid, or a metalhead, or a straight-arrow. Like everyone else, he's all of the above and much more. Billy starts the movie as a metaphor for every teenager who ever lived. By the final scenes he's both smaller and more heroic: a kid trying simply to be good at being himself.