'Witness' is a chilling reminder of the unimaginable 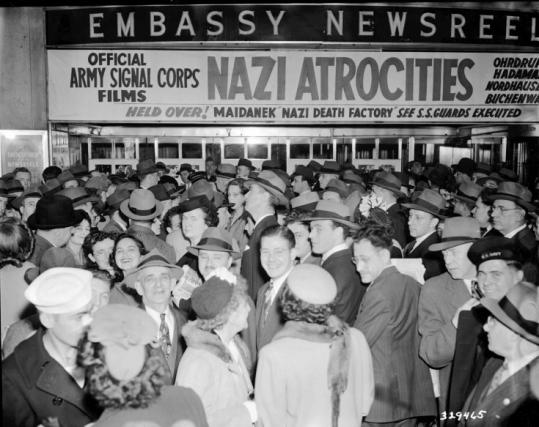 After World War II, one of the few filmmakers that showed the full horror of the death camps was the Army. (Shadow Distribution)
Email|Print| Text size – + By Ty Burr Globe Staff / January 2, 2008

"The place from which you remember an event shapes the nature of what you remember," says historian Michael Berenbaum, one of the wiser talking heads in the documentary clip-show "Imaginary Witness: Hollywood and the Holocaust." The event under discussion is the central cataclysm of the 20th century, the systematic extermination of millions of Jews by the Nazi war machine. The place from which it's remembered in popular culture is Los Angeles, home of a film industry as neurotic as it is powerful. On one hand has been denial, on the other hand kitsch. It's remarkable that good movies on the subject come out at all.

Daniel Anker's film, made in 2004 for the American Movie Classics channel and belatedly turning up now at the MFA under the co-aegis of the Boston Jewish Film Festival, faults Hollywood both for ignoring the Holocaust during the war years and for trivializing it later. It's a mixed message that coheres largely thanks to Anker's archival spadework and his luck in securing interviews.

The argument that US movie studios downplayed the Nazi threat in the years leading up to World War II is made not just clear but understandable: For every "Confessions of a Nazi Spy" (1939) or "The Mortal Storm" (1940), there were rantings from isolationist anti-Semites in Washington about Hollywood Jewish propaganda. The studio heads, assimilators to a man (Harry Warner excepted, perhaps), were loath to call attention to themselves, especially with Joseph Kennedy warning them, "This will be seen as your war."

It was everyone's war, of course, and when it was over, US Army Signal Corps filmmakers returned with horrifying evidence of the death camps - footage the made-for-TV "Imaginary Witness" can't bring itself to show. One of the surprises Anker delivers, though, is that the Hollywood studio chiefs themselves toured Auschwitz on orders from General Eisenhower, in hopes that they would in turn bear witness to the world.

In this they failed. The Holocaust was rarely treated directly on American screens until the late 1950s and early '60s, with the release of "The Diary of Anne Frank" and "Judgment at Nuremberg." (Sadly, the film doesn't mention Sam Fuller's 1959 B movie "Verboten!," one of the first to incorporate newsreel footage of Nazi atrocities). In the studios' defense, even death-camp survivors didn't want to talk about what they'd experienced.

It was the upstart TV networks that first broke ground. "Judgment" was originally a "Playhouse 90" presentation (with the words "gas chambers" bleeped out so as not to offend the sponsor, a utilities company) and Anker unearths a mind-blowing 1953 "This Is Your Life" episode featuring Holocaust survivor Hannah Bloch Kohner - reality TV to singe your eyeballs.

As "Imaginary Witness" tracks the gradual emergence of the Holocaust in pop culture through the '60s, '70s, all the way to the inevitable apotheosis of 1993's "Schindler's List," Anker switches gears. Can the unknowable be put on film? Should it be? Elie Wiesel blasted the 1978 NBC miniseries "Holocaust" as a trivialization, but the clips of a later miniseries, 1988's "War and Remembrance," are shocking in their explicitness. Not everyone approved. "The idea that we can re-create the event . . . is in many ways a desecration," says writer-professor Thane Rosenbaum.

Counters historian Neal Gabler, "Hollywood is the means by which most people for better or worse come to terms with the Holocaust." In the post-"Schindler" universe the question isn't whether to tell the story, but which story to tell, and how to tell it. "Imaginary Witness" touches on some of the films that have since come out, including Roman Polanski's 2002 "The Pianist" but not Tim Blake Nelson's "The Grey Zone," made the same year and perhaps the most unblinking stare into the machinery of state murder put on film.

That's an omission, as is the failure to confront "Holocaust fatigue" - the dilution of impact that comes when a profound subject surges in commercial popularity. "It's not that it was bad; it just wasn't good enough," says Gabler, recounting some critics' response to the NBC miniseries. That challenge matters more than ever. By far the worst thing that could happen to Holocaust movies is for them to become familiar. One could argue they already have, even if this documentary doesn't.

Ty Burr can be reached at tburr@globe.com. For more on movies, go to boston.com/ae/ movies/blog.

Imaginary Witness: Hollywood and the Holocaust

At: Museum of Fine Arts, today and various dates through Jan. 17