'Atonement' brings the long tracking shot back into focus 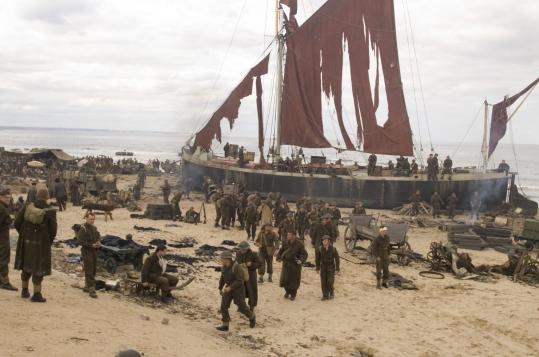 NEW YORK - The story of the long tracking shot would be best told in one take.

Our camera could begin with Orson Welles's "Touch of Evil," pass through Jean-Luc Godard's "Week End" and Martin Scorsese's "GoodFellas," and finally arrive at the latest installment in the canon: Joe Wright's "Atonement."

Through cinema history, audacious, lengthy tracking shots have captivated filmmakers and movie buffs who marvel at their grace and choreography. In a medium predicated on storytelling through the juxtaposition of images, the long tracking shot is the cinematic equivalent of a no-hitter in baseball: rare, untouched, and very difficult to pull off.

In the middle of "Atonement," a 5 1/2-minute shot unfolds as Robbie, a British WWII soldier (James McAvoy), comes upon France's Dunkirk beach, where the final point in the British retreat from the Germans is portrayed as a grim circus of defeat and chaos.

In the Ian McEwan novel from which the movie was adapted, the scene is described in a few pages. McEwan writes: "It was a rout and this was its terminus." On film, though, it took a lot more doing.

The scene was composed with 1,000 extras, a number of horses and vehicles on the beach, and (digitally added) ships off the coast. It all cost a sizable chunk of the film's estimated $30 million production budget and had to be shot in one day.

That's how long the hundreds of extras were available for, and that small time frame is what initially drove Wright and his director of photography, Seamus McGarvey, to stage the single long shot, rather than squeeze in a dozen separate setups.

"It was conceived out of necessity," said Wright in a recent interview. "We had one day with the extras and then the small issue of the tide coming in and washing away the entire set."

While the tide was out and the light was right, Wright and his crew managed three and a half takes - the fourth finally exhausting Steadicam operator Peter Robertson. (They used the third take.)

During production on other scenes, Robertson's course was mapped out, meandering through the shambled beach - sometimes on foot, sometimes riding on a motorized cart.

"When we were making it, I didn't see it in the context of the classic tracking shot, or the history of great tracking shots," said Wright, whose "Pride & Prejudice" included a long shot, as did his British TV film "Charles II." "It felt much, much smaller than that."

But of course, the shot has been received in that context.

Variety deputy editor Anne Thompson blogged: "This shot has its admirers and detractors. It's a stunning shot, but does it take the viewer out of the movie, or serve a dramatic purpose? . . . I for one get a kick out of bravura shots like this, whether it's Martin Scorsese, Brian DePalma, Robert Altman, Orson Welles, Antonioni, or Alfonso Cuaron."

Perhaps the highest praise for such cinematic devices would echo that of umpires in baseball - they're doing their job well when no one even notices them.

Instead, "The shot screams look at me," Ty Burr wrote in The Boston Globe. "Wright is a born moviemaker but he doesn't yet have the directorial maturity to make a show-off moment like this organic to the narrative: You're forced out of the film into frank admiration of technique."

Discussions of tracking shots typically begin with Welles's opening to 1958's "Touch of Evil," where Charlton Heston and Janet Leigh walk unknowingly beside a car with explosives in its trunk.

Welles, by then a veteran director, had with director of photography Gregg Toland pioneered the use of deep focus on 1941's "Citizen Kane." That meant more realism and fluidity for the camera, which could now present a foreground, middle ground, and background. The apotheosis is reached in tracking shots that hold a film's realism for long periods.

"For the actors, they really enjoy them because you're in a situation where there's a fourth wall created," said Wright. "There's no area on the set they have to imagine; it's all in front of them."

Among the most famous are Godard's 10-minute shot in "Week End" in which a couple are stranded in a traffic jam, and Mikhail Kalatozov's acrobatic shot in 1964's "I Am Cuba." The conclusion to Michelangelo Antonioni's "The Passenger" (1975) is revered, as is Scorsese's shot in "GoodFellas" where Ray Liotta and Lorraine Bracco enter the Copacabana.

Some films have attempted to push the limits of uncut film, beginning with Alfred Hitchcock's "Rope" (1948), which he had wanted to film in one take but settled for just 10. In 2002, Aleksandr Sokurov achieved Hitchcock's goal with "Russian Ark," a film that portrays three centuries of Russian history in one shot.

Many of these shots have become movie lore, and are often paid homage. Altman composed a comic and self-reflexive eight-minute tracking shot to open "The Player" (1992) featuring characters discussing the "Touch of Evil" shot. In Doug Liman's "Swingers" (1996), his characters worshipfully chat about Scorsese's "GoodFellas" achievement.

Technology has helped a new generation of filmmakers accomplish increasingly daring tracking shots, particularly with the use of Steadicams. Cuaron's "Children of Men" (2006) featured several lengthy shots, including a Steadicam- and crane-aided shot during a shoot-out.

"One has to completely bow to the fact that when Orson Welles did the 'Touch of Evil' shot, he didn't have a Steadicam," said Wright. "Steadicams have totally liberated the tracking shot."

Paul Thomas Anderson has made the tracking shot a trademark, particularly in "Boogie Nights" (1997) and "Magnolia" (1999). His "There Will Be Blood" is shot in a different style, but does track Daniel Day-Lewis's character carrying his injured child.

"It's only impressive because Daniel could actually carry that boy for that long," joked Anderson.

The director, a great fan and friend to the late Altman, said a guiding ethos is to have fewer cuts: "The more things can be condensed or simple is ideal," he said.

Discussing the appeal of the tracking shot, Anderson said: "You're after one thing, which is nice, as opposed to 10 or 15 small things when you have to chop it up. You get that terrific feeling at the end of it, like 'We did it. We got it.' Or you don't."

Digital editing, Anderson said, has given him a new perspective on the length of his takes.

"You really see the length of your shots. It's kind of hilarious. You sort of look at the graph and it chops along, chops along, then flatlines for a long time. You see a movie as a graph."

For Wright's next film, "The Soloist," which is now in preproduction, he acknowledges one scene is tempting to shoot in one long take, but was reluctant to do it "just for the sake of doing them."

"Filmmaking by nature is about montage and in a way there's something quite rebellious about the long tracking shot," said Wright.