'Treasure' sequel is powered by ham and cheese 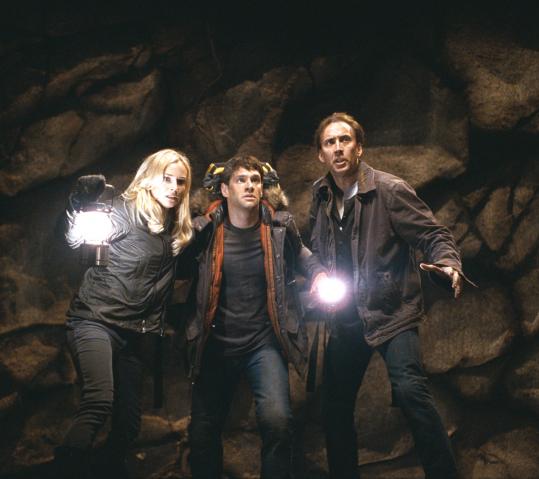 Can you imagine how dreadful the "National Treasure" movies would be if Nicolas Cage weren't in them? Another star might make the mistake of taking the franchise seriously, whereas Cage cocks his hairpiece, sets his inner ham on stun, and sallies forth to dispense nuggets of US history while jumping over pits of fire. He's alive to the joke of a superhero academic.

"National Treasure: Book of Secrets" is often as noisy, dippy, and enjoyable as 2004's "National Treasure," and when it's not, it's just another sequel, more absurd than most. But absurdity is this series' meat: What other movie would make a lark out of kidnapping the US president? Or try to get us to buy a high-speed car chase in notoriously congested London?

Produced by Jerry Bruckheimer with all spigots open and directed once again by journeyman Jon Turteltaub, the new "National Treasure" sends Benjamin Franklin Gates (Cage) on a fresh scavenger hunt around the monuments of Western Civ. At stake is more than just Cibola, the conquistadors' Lost City of Gold, but the Gates family name. A villainous interloper named Wilkinson (Ed Harris) has come forth with evidence that Ben's great-grandfather led the plot to assassinate Lincoln. Base calumny!

How a chase after treasure will prove the ancestor's innocence is never entirely clear, and anyway the movie's too busy straining to reconvene the troops from the first one: Ben's estranged historian girlfriend Abigail (Diane Kruger), his comic-relief tech specialist Riley (Justin Bartha), professor father Patrick (Jon Voight). The "National Treasure" movies give you two hams for the price of one, and for gravy here's Harvey Keitel replaying his FBI agent with bizarre facial hair and Helen Mirren - the Queen herself - having a high old time as Emily, Ben's mother and Patrick's very divorced ex-wife.

It's the kind of movie where mom's a specialist in ancient Olmec because that's what the plot requires just then. After shopping for clues at the Statue of Liberty in Paris (that's right) and a high-spirited plundering of Buckingham Palace, Ben and company come up with an ancient Native American treasure map, not to mention the novel (and wholly false) tidbit that Queen Victoria sent aid to the Civil War Confederacy.

As in all sequels, the formula has hardened. Ben acts crazy and cross-references historical trivia until he deciphers a clue, the team advances to the next step of the hunt, then there's a rip-snorting action sequence. Rinse, repeat. The only time this varies is during the above-mentioned kidnapping of the president so Ben can get at a clue in the President's Book, a legendary tome containing all the nation's paranoid secrets.

Luckily, the president turns out to be nice old Bruce Greenwood, who played JFK in "Thirteen Days" so he already has more presence than any sitting president you can think of. He's a fan of Ben's work, too, and their relationship is as close to a buddy film as "Book of Secrets" gets. The next "National Treasure," awkwardly set up here, looks to feature this friendship more heavily.

As long as it's galloping along, the movie's perfectly good popcorn - in itself a rarity these days - but eventually you get down to the burnt kernels at the bottom of the bag. Like this one: How on earth did the Olmecs of south-central Mexico come to build a city beneath the of South Dakota? Or this one: Why can't Harris's character make up his mind and be either a good guy or a bad guy? The film's US history may be right but its GPS is busted and the screenwriting needs an overhaul.

A scene late in the film finds the principals standing precariously on a massive stone teeter-totter above an underground abyss. That about sums it up: Cage and the filmmakers do a fine job balancing this anvil for as long as they can. Eventually it all comes crashing down and we can go home to tend to our happily aching heads.