Coppola caught between fantasy and folly 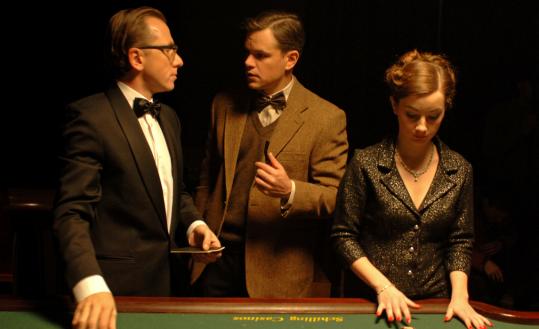 In recent interviews, Francis Ford Coppola has said he has reached a point in his life and career where he intends to make movies solely to please himself. Give the man high marks for honesty. No one but he may be able to make it all the way through "Youth Without Youth."

The director's first film in a decade is a sweetly muddleheaded vanity project - a languorous European art-drama of the sort Visconti and company were turning out in the early 1970s while Coppola was off making "The Godfather." Based on a story by the prolific Romanian historian-novelist Mircea Eliade, "Youth" is an era-spanning fantasy with much on its mind: the roots of language and love, reincarnation, the propensity of lightning to strike twice in the same metaphorical spot. At its best, the movie's crazy in unexpected and poetic ways; at its worst, merely preposterous.

British actor Tim Roth plays Dominic Matei, a brittle 70-something professor of languages who, desolate over a failed life, travels to Bucharest to kill himself. It's the mid-'30s, the Nazis are on the march, and as soon as Dominic steps outside the railway station, he is struck by lightning and burnt all over his body.

During a long and grueling recuperation overseen by the kindly Dr. Stanciulescu (Bruno Ganz, mournfully courtly as ever), it becomes apparent that Dominic is aging in reverse; ultimately he's rejuvenated as a young, seemingly immortal man. The Germans would like to know how this happened and send in a mysterious siren (Alexandra Pirici) with a copy of "Mein Kampf" under her bed. Says Dr. Stanciulescu to our hero, "You have become the most valued human specimen on the face of the earth right now. Here, have some chicken."

"Youth Without Youth" rolls forward through the years, dipping briefly into World War II espionage as Dominic is courted by the nascent CIA in the form of Matt Damon, dropping in from "The Good Shepherd" for one brief scene. He also develops a double (Roth) who represents the grasping, practical side of himself; the two have long, loopy discourses on the future of the New Man.

In the postwar era, Dominic encounters Veronica (Alexandra Maria Lara), the reincarnation of his youthful love, at which point the film lifts off into a serenely cracked pan-spiritualism. After a bolt of lightning strikes her, Veronica starts speaking in Sanskrit, channeling a 14th-century Hindu nun named Rupini before going back further in linguistic time to ancient Babylon and beyond.

Her lover urges her to push on to the roots of language - to that "inarticulate moment of the beginning" - but at the peril of her own youth. The failures of the body and heart are the movie's twin obsessions, strained through overindulgent pacing and dialogue that prompts the giggles:

Veronica: "If I added up all the years Rupini's been alive, I'd be older than you."

You can see what Coppola's getting at here, and it's certainly ambitious - a fusion of Jorge Luis Borges' ironic historical fancies and Jean-Luc Godard's swooning cinema. "Youth Without Youth" is pretentious as hell but so goofily in love with the idea of itself that you feel protective toward it, the way you would toward a platypus that has lost its way.

Roth manages to make Dominic surprisingly touching - Lara, howling at the moon in ancient Sumerian, isn't so lucky - and the European locations make for fresh eye-candy. One wants to indulge the old man; one wants to hope he can make movies at least as well as he makes wine, if not as well as he once made "The Godfather" and "The Conversation" and "Apocalypse Now."

As "One From the Heart" was the director's midlife folly, though, so "Youth Without Youth" is a meditation on old age that's deaf to its own excess. Yes, it's nice to make movies for oneself. It's also masturbatory. To lose the will to connect with an audience is to lose something close to the heart of art.

Ty Burr can be reached at tburr@ globe.com. For more on movies, go to boston.com/ae/movies/blog.

Written and directed by: Francis Ford Coppola, based on a novel by Mircea Eliade

Rated: R (some sexuality, nudity, and a brief disturbing image)

In English, German, Italian, and Sanskrit, with subtitles