Hollywood takes a shine to 'Juno' writer's body of work 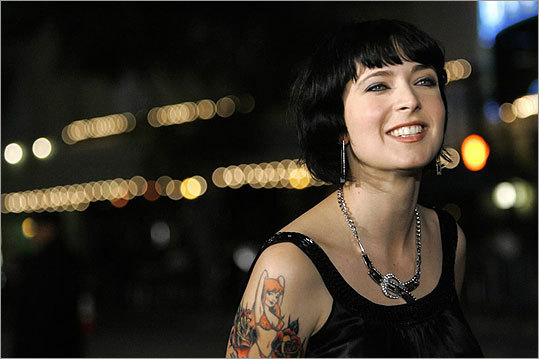 Diablo Cody, who wrote the script for the movie "Juno", posed at the movie's premiere at the Village Theatre in Westwood, CA. (Mario Anzuoni/Reuters)
Email|Print| Text size – + By Desson Thomson Washington Post / December 15, 2007

It goes like this: Midwestern misfit decides - on what-the-hell impulse - to try stripping. Blogs about it. Hollywood talent manager reads her witty, provocative postings, encourages a tell-all book. Out comes "Candy Girl: A Year in the Life of an Unlikely Stripper." She does Letterman. Jokes that she felt anthropological about her lap dancing, like a "naked Margaret Mead."

She then writes "Juno," a screenplay about a teen whose wisecracking life is suddenly beset by an unplanned pregnancy. Fox Searchlight makes the movie. It becomes the buzz of festivals from Toronto to Stockholm, and earns multiple Golden Globe nominations, including one for her screenplay. More Hollywood deals follow. She finds herself on the phone with Steven Spielberg, who's asking her to write the pilot for a Showtime series . . .

She doesn't make eye contact at first and comes across as some combination of shy and mellow.

That Zen vibe is her ultimate trump card, she says, at Hollywood power meetings where she has already successfully pitched several post-"Juno" scripts, including "Jennifer's Body" (female cannibal rampages at college; eats boys) and "Girly Style" (three nerdy college gals take a gonzo road trip - her answer to "Superbad"). And yes, she admits, going one-on-one with those (usually) middle-aged men does have its echoes in the pole gyrations she honed at various Minneapolis strip clubs.

"I was never good at selling my body," she says, warming up to full eye contact. "It's one of my failings as a woman. But I'm excellent at selling my shtick."

"I'm always very relaxed. I think - especially out there (in Hollywood) - people are attracted to a lack of desperation."

They're also attracted to her writing style: She's this year's pop-culture-referencing Wit Girl, a wannabe Dorothy Parker of the blogosphere, whose shock-value, droll postings make readers feel wickedly hip for appreciating them.

Her blog - we won't print its raunchy name - reflects the willy-nilly, gonzo momentum of her personal life. She might recount a trip to Las Vegas ("the Labyrinthine Republic of Ding-Ding-Ding"), recommend a sex toy, or revel in bad-hair lamentation ("I'm like a masochistic little duck that's been paddling in the wake of the Exxon Valdez," she mourns, after a disastrous session involving glued-in hair extensions and "some evil, viscous oily stuff").

Her blog is also where you'll find the news that she and musician-husband Jonny Hunt (whom she has called "the Jesus in my ravaged temple") are splitting up. And about her resulting tattoo change from "Jonny's Girl" to the still-healing "old-skool roses."

Yet her provocations are also softened by a sensitive geek-chic attitude of self-doubt, honesty, and even sweetness - all (conveniently?) in line with the prevailing vibe of youth culture seen in cult films such as "Ghost World," "Napoleon Dynamite," and "Knocked Up."

The film's major plot point comes from outside her personal experience. "I surprised myself," says Cody. "I've never been pregnant. I'm a stepmother, but I'm not a mother."

"She's the real thing," declares Mason Novick, who "discovered" Cody's blogs in 2003 and now is her manager. "That's what is great about her. It's not the Hollywood version. It's not a character. That's what she's like."

So, just how real is "Diablo Cody," whose actual, tax-paying name is Brooke Busey-Hunt?

"I feel like my pre-existing identity was a persona," says Cody, referring to her Chicago suburban upbringing. "I was very socially awkward and not very attractive. Severely nearsighted. Coke bottle glasses. Weird body. Teeth really messed up. Weirdly shaped - I still am. Stringy hair. I dated geeks exclusively. And even when I blossomed - to use a nauseating term - it was so ingrained in me that I was a nerd, it didn't matter. "

Brooke also felt overshadowed by an older, "high-maintenance" brother who ate up all the "psychic space" in the house. It was only at the University of Iowa that she realized "all this time I myself had been a noisy, dramatic attention whore."

A media studies major, she began writing short stories but didn't try to get published because she was so "competition-averse."

As Cody recounts it in her memoir: After graduation and a couple of dead-end office jobs in Chicago and then Minneapolis, one night she signed up for "amateur night" at a strip club called the Skyway Lounge. She didn't win, but chose to keep working the pole in various clubs as "a final opportunity to raise some serious heck-ola without facing grown-up consequences."

She'd already been blogging, but decided to post about her extracurricular night life under an alias. "Diablo Cody" was born after a drive through Cody, Wyo., listening to a song called "El Diablo." After she quit the clubs, she brought her blog to the alternative weekly Minneapolis City Pages, where she also worked as a writer. Cody portrays her stripping as an offshoot of her budding sense of impulsive adventure.

Cody "is somebody with talent who got her work noticed in the old-fashioned way," says Rob Nelson, who knew Cody and edited a few of her articles at City Pages. ". . . If you want to be noticed in an environment that's hyper-competitive, and at a time when everyone's attention is divided in countless ways, what else are you going to do?"