'Love' is too pretty to be true 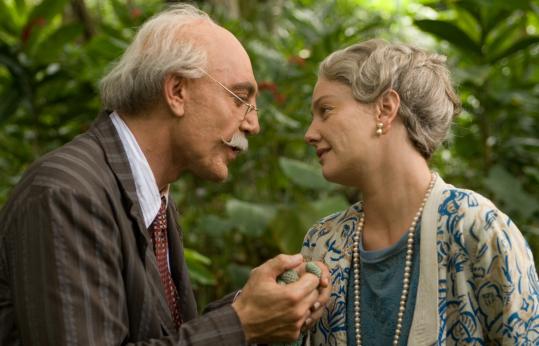 During a moment intended as poignant in the silly new film of "Love in the Time of Cholera," 70-something Fermina Daza (Giovanna Mezzogiorno) asks her long-lost love, Florentino Ariza (Javier Bardem), to avert his eyes as she disrobes. Why, he asks. Because you won't like what you see, she replies. Are you kidding me? For a woman described as "ravaged by age" in Gabriel García Márquez's novel, her naked body still looks relatively ravishing. Which, of course, is the central problem with the conceit of this adaptation: Everything is gussied up.

García Márquez's 22-year-old book asked, and captured rather explicitly, what sex would be like between two old people who've waited more than 50 years to get it on. The brutal truth of the novel has been perfumed with an artificial beauty. The movie is knowingly and accidentally funny and has been made with the kind of tastefulness and professionalism that dip into ribaldry just to prove it's not as stodgy as you expect it to be (Shakira even bleats and ululates on the soundtrack). This is all to say it's often watchable (and listenable) without ever being good.

The longtime screenwriter Ronald Harwood (Roman Polanksi's "The Pianist" and "Oliver Twist") and the director Mike Newell ("Four Weddings and a Funeral," "Donnie Brasco," and the fourth of the Harry Potter movies) cut right to the chase. In turn-of-the-last-century-ish Colombia, young Fermina Daza (Mezzogiorno, again) and Florentino Ariza (Unax Ugalde) fall in what García Márquez called "devastating love." It's also forbidden. Her shady businessman father (John Leguizamo) wants Fermina to marry someone more respectable than a telegraph operator. So he pushes on her Juvenal Urbino (Benjamin Bratt), the handsome, unreasonably dapper doctor who helped saved thousands from a cholera epidemic.

Her heart belongs to the telegraph boy, but the heroic doctor wins it with hilarious persistence. Bratt plays Urbino with passive-aggressive lasciviousness (see him open Mezzogiorno's nightgown to "examine" her chest). If Billy Dee Williams were doing Pepé Le Pew, it'd go something like this. Bratt's outdone in the shamelessness department only by Leguizamo, who seizes the role as an opportunity to practice his keyed-up Warren Oates and Vito Corleone impersonations, often at the same time. You have to wonder how much less cartoonish and more authentic the movie might seem were it actually in Spanish. Maybe it would have just been an authentic cartoon, but even that would have been an improvement.

In any case, poor heartsick Florentino grows into the reliably entertaining personage of Bardem and spends the next five decades filling the void in his heart with the empty romantic calories of less meaningful sex: 622 times. The movie gives us a thumbnail version as it flits between his half of the film and Fermina's. But as a distillation of a densely woven novel, the movie exposes the book as rather soapy. It brings out the comedy, mostly involving the sex. Hector Elizondo, as Florentino's uncle, delivers the biggest laugh in the movie when he catches Bardem in flagrante delicto - it feels like an outtake, and yet it's funny, all the same.

But the movie doesn't work, because Harwood and Newell never figured how to transport the book's moving ironic essence: that love blooms amid so much corporeal decay. The heart may want what the heart wants, but the body - stinky, spotted, and unreliable after all those years - has a different agenda. Little of the fragile wisdom with which García Márquez imbued that idea has survived this timid Hollywood treatment.

The casting speaks to that, too. Having 33-year-old Italian Mezzogiorno play Fermina Daza as a young woman and as an old one confirms a lack of courage. She's not bad, particularly as a besotted adolescent who can turn on the waterworks with ease, but she doesn't seem experienced enough a person to make me believe her as a matron in her 70s. Nor is she as fascinating to watch as either Catalina Sandino Moreno or Ana Claudia Talancón, who have smallish parts.

The conceit, of course, is that within those seasoned bodies are youthful spirits. But you never believe that. For a sense of what the movie is afraid of, you don't have to search hard. The great Fernanda Montenegro, who's a year older than García Márquez, turns up as Florentino's protective mother. No makeup can create the years that line her face or the heft that fills out her body. She's eventually turned into a sad grotesque, but the authority of age she brings - not to mention her age's countenance - leaves a deep impression, anyway. Under the prettified circumstances, she's pure magic realism.

Wesley Morris can be reached at wmorris@globe.com. For more on movies, go to boston.com/ae /movies/blog.