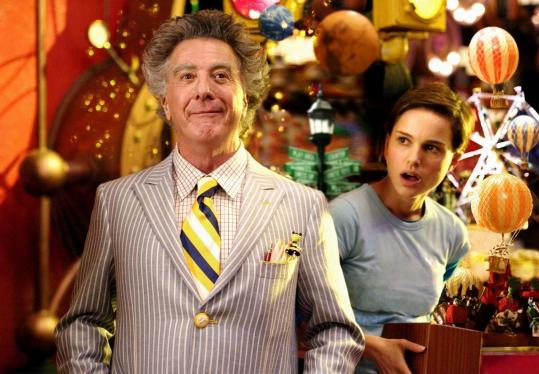 "Mr. Magorium's Wonder Emporium" is about a magical toy shop, but it has some of the sadder moments I've seen in a movie all year. Take the scene where the toy shop's sprightly clerk (Natalie Portman) asks the accountant (Jason Bateman), on the premises to assess the shop's worth, if he sees any sparkle in her. He can't. No twinkle either. She should consider the source, and yet he's not entirely wrong. For the first time I can recall, Portman's sparkle is forced.

This movie, which Zach Helm wrote and directed, is having the same conversation with us. We're all accountants; Helm lives in a toyshop; and for the 90 or so minutes "Mr. Magorium" drags on, he keeps interrupting his tale to ask us to stop and smell the cuteness. Of course, the more the movie insists on imparting its lessons for living - "Your life is an occasion. Rise to it" or "What you need to believe in is you" - the more you feel like an accountant and the less ashamed you are.

This feels like both Wes Anderson on training wheels and severely medicated Roald Dahl - be happy or else - with Dustin Hoffman doing Mr. Magorium as a kind of doddering Willy Wonka. (You can imagine Bill Murray doing a nastier, boozier version for Anderson.) Hoffman is fun. He bops around the sets with his hair teased out and gelled (with, what, Krazy Glue?) and wears snazzy, well-tailored suits. One of the happiest sights in the whole movie is the soft-shoe he does on a sheet of bubble wrap. That's heaven to me. And since the emporium feels cramped and overstocked with stuff and kids (it's like half shop, half day care), all the wonder in the movie is Hoffman's.

The vividness is theatrical as opposed to cinematic. The camera seems to fly around the inventive sets but visually the store never comes to life. It is, however, alive and extremely unhappy that its ancient owner (he's 243 years old, but doesn't look a day past 67) wants to pass it on to Mahoney, the chic but uncertain second-in-command Portman plays. The closer we come to Mr. M's last day, the grayer the emporium's colors become. Eric, the store's 9-year-old clerk, played by Zach Mills, suspects this graying might have something to do with the appearance of Henry, that sparkle-blind accountant.

For reasons only a bully could explain, this bright, intelligent, extremely likable child is friendless. In one of the movie's two best scenes, he follows his mother's instructions and tries to make a buddy. He chooses Henry. They write notes and hold them up to a window. The boy invites the man to play checkers. The man writes that he's working. The boy responds, how about when you're not working. And the man writes - with the camera getting in good and flagrantly tight on Henry's tablet: "I never stop working." The scenes between Mills and Bateman are wonderful because they're the actors whose connection transcends Big Themes.

The movie is rather selective in its disdain for toil. Mr. Magorium's been working for 113 years! Of course, Magorium loves his work and brings pleasure to others. That seems lost on Henry. Look at those drab suits. A happy laborer wears seersucker (Dustin, where can I get one?). Obviously, the movie aims to change that. But Helm is maddeningly indiscreet about the correction. He thinks in large type and skywrites all the ideas. His screenplay for last year's "Stranger Than Fiction," also about a dud accountant who discovers the meaning of fun, did the same. (Dustin Hoffman was having as good a time in that movie, too.)

"Mr. Magorium" is a far less aggravating experience. Just like the previous movie, this one fetishizes literariness, genius (Bateman talks to an Einstein doll), and the surrealism of René Magritte. But Helm places an actual child at the center of this picture as opposed to a metaphorical one. Even then, the film is inert and self-doubting. Its insecurities do it in. If a director more or less has to ask, "Does this movie make me look magical?," the answer is definitely no.